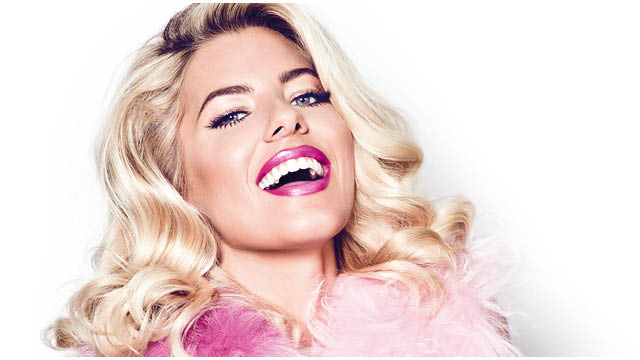 Mollie King poses for the latest cover shoot of Notion Magazine, set to be released this week.

The Saturdays Mollie King looks lush, and her luscious lips on the cover of Notion Magazine shows why she is still on of the hottest Saturdays. Saying that, they are all pretty spectacular aren’t they? “I think I should be one of the next Top Gear presenters,” “Think about it, it’s perfect. NOBODY would see it coming. Women are obviously better drivers than men, for a start; so I’d be bringing skill, but I think that show needs a bit of girl power.”

“I don’t cook, you see. I’ve cooked for David once: I made him eggs benedict. But I didn’t make the sauce. Because I’m saucy enough!”. “Anyway, David cooks for me pretty much every night. He makes a very good Sunday roast.”

ON HER SUPPORTIVE FAMILY

“Everyone was saying: ‘It’s not going to happen. Go to uni, get a proper job.’ My mum was the one who was saying: ‘Give it a go.’”

ON BEING A JUDGE ON THE X FACTOR

“Maybe,”  “I’d love to be one of those panellists on those shows. I have a lot of opinions about everyone who’s out there.”

ON HER FELLOW POPSTARS

Cheryl? “She’s done so well to transition from Girls Aloud, she’s the ultimate glamorous goddess.” What about Jessie J? “Best voice in the business.” We basically turned up in binbags to the High School Musical 3 premiere. We should have been literally put in a bin for wearing those. It was my one moment to meet Zac Efron and I was wearing a binbag. Not good.”

ON COPING WITH FAME

“I’ve learned that I’m stronger than I once thought I was,” “I’ve been surprised, sometimes, and quite proud that I’ve managed to be strong. Whatever happens, the show must always go on.”

ON THE SATURDAYS BREAK

“I’d be lying if I said I was ready for the band to end,” “We’ll get back in the studio at some point. I’d really like us all to do another tour together.”

“I’ve wanted to do this since I was six years old. If there’s a day when I can’t be bothered to get up I just remind myself that the six-year-old would be dying to do this. And the day this gets boring is the day you should stop. Everyone can tell when you’re bored or sick. I’m hungry to do more, all the time. If I wake up and I’m over it, I’ll stop.”