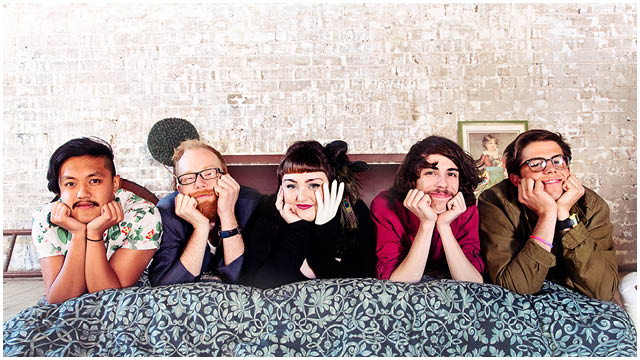 Future Soul band Levingstone are relatively new to the scene. Nowadays it’s becoming more common and more common for artists’ to fuse genres together to create something quite special.

Although it may not always work out for some, Levingstone despite all odds of collectively coming from complete different backgrounds have nailed it on the head. Using strong undertones of jazz, rock and soul accompanied by some pretty angelic vocals, the band fearlessly dare to be different.

Levingstone have just dropped their very first single ‘One Up’ and Flavourmag catches Sammii Su up with them to talk about the secret to fusing genres, their influences and why hip hop is the only genre missing from their sound. Margaret Tra writes.

You guys flawlessly fuse genres, how did that start?

To be honest, it was never a conscious decision to create music that wasn’t easily quantifiable. We just started writing together and the rest is (our very short) history. Our songwriting process is very organic – someone will come in with the seed of an idea, or even plant one on the spot, and the rest is improvised until it becomes cohesive and grows in to a song.

Was it difficult to find your sound as a band?

We all have very different backgrounds – so it really should have been a lot harder than it was! Dom was in a pop-punk band ‘Sound of Seasons,’ before Levingstone. Ryan was in a funk band called ‘Jeff.’ Chris was involved in a number of projects spanning pop to jazz to metal, and Jesse really likes Keith Urban (not a joke). Sammii was in a ‘post-punk’/goth band that wanted to be ‘The Cure,’ and then an indie group ‘Five Dollar Billie.’ Basically – put as all together and we’ve run the gamut of genres twice over! But we all came together with a common love of jazz and soul, and those genres can be great vehicles to explore a multitude of sounds. In the end, it all fell in to place almost suspiciously easily…

What other projects are you working on?

The boys are all working musicians in various capacities – doing session work, playing functions and such. Which means they’re all working with a lot of people and keeping their horizons pretty broad musically. I’m a bit more of a loner with a solo project that may never see the light of day…

Do you guys ever think about coming to Europe?

I think “dream” may be a more apt word to use in that sentence. That is definitely a huge ambition of ours! We’re doing our first Australian tour at the moment, and we’re already addicted to the road!

What bands influence you guys?

Hold on, just taking a really deep breath… Ah alright, here’s an abbreviated list of the ones we share: Robert Glasper, Radiohead, Snarky Puppy, Hiatus Kaiyote, George, Ben Folds… it hurts to leave so many out…

Sammii what’s it like being in a band with a bunch of lads?

Hell. They smell, they’re noisy, they drink all the time and they swear too much. Wait… no, that’s me. Sorry!

If you could work with anyone, who would it be?

Gordon Ramsay. We need to get this damn nightmare of a kitchen in order! Or the guy who produced for Phoenix. Damn! Or Björk, mostly just to hang out.

Looks like you’re just missing hip hop as a genre in your band, any thoughts on adding that to the list?

That’s a good question… why isn’t that on the list yet? To be honest, I think its in there somewhere… some of the grooves Ryan plays are definitely hip hop inspired. I have also heard Dom rap once before, but that won’t be making it to a record any time soon.