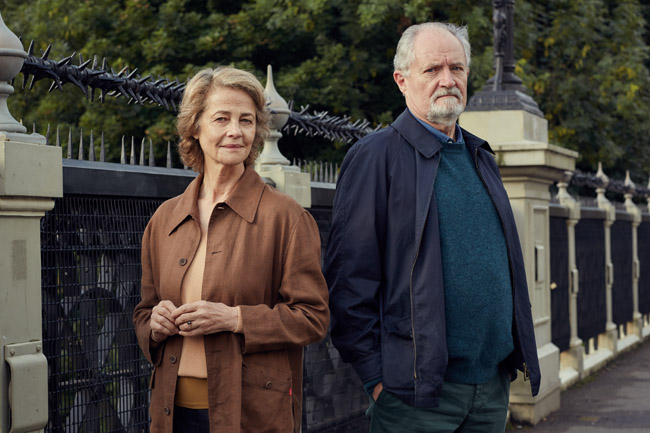 With a title such as The Sense of an Ending, big expectations lay ahead, not even the greatest performances can make up for less than satisfying ending, building to a crescendo which forever hovers in the air never making that crashing descent of closure it so truly needs.

With a screenplay adapted from Julian Barnes prize-winning novel of the same name, set within the leafy affluent streets of London for the most part, The Sense of an Ending consists of love lost amongst suppressed memory, suicide and the search for truth and forgiveness with Jim Broadbent leading with a passive compassionate performance.

Lead with a narrative from Broadbent, we open with a scene of a young Tony played by Billy Howle in his Oxford years before quickly flipping to the present day, a much older Tony in the form of a cantankerous Broadbent starting his day alone, greeting the postman with grumpy disdain as he makes his way to his vintage camera store in the centre of London. The postman handing a letter to Tony who puts it straight into his pocket; at every given moment the camera focuses on the unopened letter to mark its significance. Once Tony finally opens the letter he finds out he has been left a diary which belonged to his best friend Adrian back in their Oxford days by his ex-girlfriend’s mother – played by Emily Mortimer in the flashback sequences – on her passing, which is currently in the hands of his ex-girlfriend Veronica.

Instantly it raises questions as to why would Veronica’s mother have the dairy in her possession? Even though this is never questioned by Tony, he, along with the audience ventures down the road of a lacklustre detective story as flashbacks to a young Tony and Veronica (played by Freya Mavor in her teen years and Charlotte Rampling in the present day) play out. Whilst Tony has his own muddled memories of what happened in his youth it appears he has suppressed the memories of the real events that actually unfolded. We witness Tony going about his life supporting his heavily pregnant daughter, and revealing his past to his ex-wife over dinner as well as playing stalker on his quest to obtain the dairy from his first love Veronica (Rampling).

The story flows with an intriguingly enticing plot but never quite builds enough passion that has a tasty bite to really grab at the heart, the characters, even when Veronica hands Tony a letter he wrote as a young man in quite clearly an angrily emotional state feel almost detached from their reality. There is an icy coldness that runs through the script as well as our character personalities which leave you cold.

The Sense of an Ending is an intriguing watch, with an honest and subtle performance from Broadbent as the stand out talent. However, it doesn’t give a rewarding sense to an ending with nothing but an achingly empty hole at its very core.

The Sense of an Ending is in cinemas April 14th