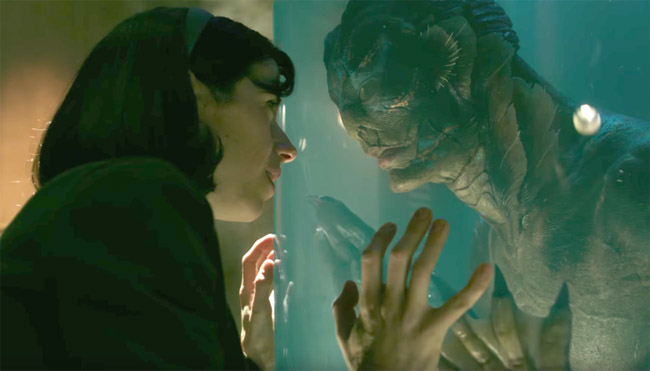 There is no disputing Guillermo del Toro’s worth as an extraordinary filmmaker. From Pan’s Labyrinth to Hell Boy bringing fantasy to life with a beating heart. In his latest fairytale for adults he teams, a mute cleaner with her ideal mysterious partner of a human-shaped creature of the sea, the beauty and wonder of his layered creation is a story of a battle against all odds.

Sally Hawkins is no stranger to a quirky role and she excels at crafting heartfelt connections for almost every character she plays. Here Hawkins takes on the role as Elisa, the mute cleaner employed at a government institution that houses some questionable secrets. One secret, in particular, is the imprisonment of an unknown, almost human, sea creature which endures a daily torture regime at the hands of Michael Shannon’s vile Strickland. Purely by accident and inquisitiveness, Elisa stumbles upon the ‘dangerous’ creature and via the form of sign language strikes up a tender friendship with the nameless being (Doug Jones) which quickly embarks on a loving relationship. Their love however become’s a race against time to save him from a desperate fate, one that could either see him executed by the Americans for being an unknown threat or one of a research rat for the Russians.

Visually stunningly, del Toro’s feature has an earthy warmth to its tone; with a luscious set design that implies the time period of the story setting with precision and quality. It’s a time where certain relationships were frowned upon indicating a secondary meaning. While seemingly set in the 60’s it also has a modern touch of elegance through its prejudices and also its acceptance in the face of adversity.

Our principal players are delightful to watch but their performances would be lost without the supporting cast. A supporting cast that has been unforgivably overlooked but always gives 110% in whatever role they appear. Richard Jenkins has his moment as Elisa’s gay neighbour and friend, morally virtuous but with a generous heart. Octavia Spencer also puts in that feisty comedic turn as Elisa’s colleague at the institution. Finally, we have Michael Stahlberg – who must retain one of the best agents in the game – constantly showing up and showing out in most of the best films over the past two years; he doesn’t disappoint here as a scientist-turned spy with an impeccable conscience.

Accurately placed for a spin on a Valentine’s Day release, it is so much more than just a romantic, it possesses something for everyone to enjoy. It’s simply beautifully enchanting and brutally mysterious, visually luscious and mesmerising, del Toro is a cinematic genius.

The Shape of Water hits cinemas on February 14th