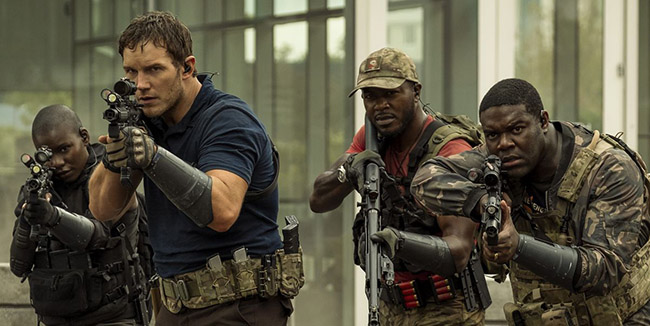 The Lego Movie filmmaker Chris McKay teams up with Chris Pratt on his latest generic sci-fi time travel, alien assassination actioneer that puts the fate of the world into the hands of a doting father. A two-headed popcorn filler that is part sentimental family fodder, part save humanity from the evil ancient aliens, it won’t be winning any awards but it’s big and brash enough to keep you entertained.

Pratt is Dan Forester, an ex-army veteran turned high school science teacher – because all science teachers are that shredded right? – with Daddy issues that came to fruition after being abandoned by his own death-wish, eccentric ex-army, fully buff Father (J.K. Simmons) as a child. Before we know it, troops from 30 years into the future arrive via a giant portal in the middle of a televised Football match to declare that they need to recruit everyone they humanly can to try and fight off an Alien invasion that will see humanity become extinct.

This is where the Chris Pratt vehicle begins to unfold his saviour storyline with the input of the annoying, nerdy kid from his class that knows way too much about volcanoes. There is something all too familiar here, the Tom Cruise led Edge of Tomorrow springs to mind; the first half of the movie spends way too much time building its foundations and its bridges before any real action starts. We get to see Dan fully dote on his young daughter, his perfect marriage and his obvious hatred for his own Father seeps through his pores before anything drastic even happens.

But once he steps foot in the future, Dan and his military skills kick in, with just a gun in hand, he leads his troops against the lightning speed of giant-headed aliens that are more than hungry for blood. Now, this mission is only supposed to a short one, however, in that time he comes face to face with his future and builds what seem to be lifetime bonds, all whilst hardly obtaining a scratch.

There is an element here that’s supposed to have that emotional tug, where themes of forgiveness and letting past grievances go are prominent but the looming action, adventure and wholehearted desperation to save humanity trumps it at every corner.

Pratt proves he is always up for any job, be it big or small, got to give it to the man, he always delivers and a little bit of humour always goes a long way too. Even his team-up with Simmons provides an extra spark of electricity.

McKay hardly breaks any barriers but he gives it 110% in his efforts for something big, brash and has a heart to match, it’s just a shame this won’t get time on the big screen. Now I am really ready for Pratt to save the day against a real Alien Apocalypse.