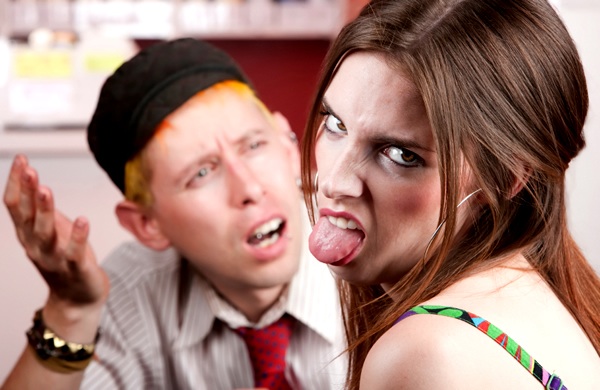 The top worst first date ideas of all time chosen by Lovestruck.com

The chemistry is sizzling, the connection is there and you can’t wait to get to know more about them. If two people are meant to be together, it doesn’t matter where you go on your first date, right? Wrong! Where you go on a first date sets the scene for how the whole romance will play out – and let’s face it, first dates can be awkward at the best of times.

Once one of my mates Kim got taken to church on a first date. Her date was very religious and he proceeded to sing some hymns very loudly and animatedly. Each to their own, of course, but Kim is an atheist. When he asked her along to the next service, she declined and never saw him again.

A work colleague called James once got invited by the hot girl in accounts that he had been eyeing up for week to her Great Aunt’s 70th. She said they’d pop in, say Happy Birthday and make their excuses and go to the pub. Two hours later, he was still chatting to one of the Great Aunt’s friends, who had bad breath and a hairy wart.

We’ve all had our winning first dates – and ones we never wish to repeat, but whatever the situation, here at Lovestruck.com, we’ve compiled a little list of the ones you’ll want to avoid at all costs…

Sports: You’re both into cycling, running or skiing, so you’re guaranteed to have a laugh if you go together? Erm, no, this isn’t always the case. Some people can get a bit over-competitive and it can end in tears. Imagine thrashing them at tennis and never hearing from them again, or being beaten at bowling and pretending to not mind. Thought not…

Family party: If you hit it off with your date, they will invariably meet your family at some point but without stating the obvious, the first date is far too soon and will properly freak them out.

Cinema: You have really wanted to see a certain film for yonks but sitting next to someone in silence for two hours will not allow you to get to know them. Save the cinema for another date.

At one of your houses: This adds loads of pressure and more importantly, is unsafe. You may think you know someone but until you’ve been on a number of dates, don’t go to their house – or invite them to yours.

Group dates: A first date should just be for the two of you not a group of friends. By all means, make plans to see mates later – it’s a good excuse to leave if things aren’t going how you planned – but being in a group will completely change the dynamic. It might also make you much more nervous than you would be otherwise.

Office party: You’re career is a big part of your life, so you think that by showing off in a work situation, they might see just how great you are? No, this will be a giant fail on every level and like going out with friends with you, but much, much worse.

Strip clubs: Women may say they like them, but they probably are saying it to make themselves look cool. Actually they hate them. Avoid at all costs to save yourself any awkward moments.

McDonald’s: Unless they confess an utter devotion to the big ‘m’, this isn’t a quirky date. This is the worst idea you have ever had. A million times, no.

Where is the worst place you have ever been taken on a date?