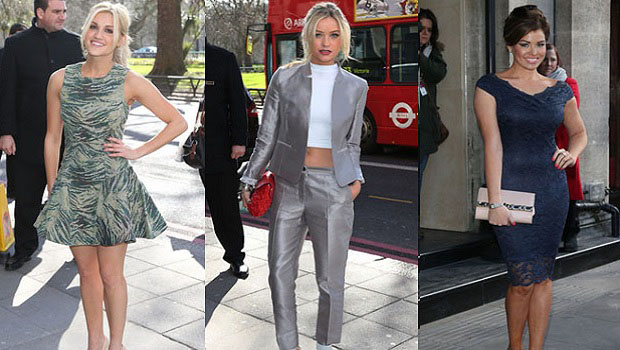 Winners at the ceremony included, This Morning for best Daytime Programme, Coronation Street was named TV Soap of the Year, Peter Andre was awarded best Satellite/Digital TV Personality and Ant and Dec received the award for TV Personality of the Year.

The stars looked as stylish as ever in current trends like monochrome, androgynous, print, mint green and navy blue – key looks and colours this season. Which stars dressed the best? My favourite outfit has to be Laura Whitmore’s silver tailored trouser suit but, take a look at the pictures below and decide for yourself. Hollyoaks star Anna Shaffer also chose a trouser suit, this time it was a leopard print matching suit, with black pointed heels and a white tee. Former Hollyoaks actress Rachel Shenton dressed down for the occasion in this monchrome outfit, she paired her check trousers with a black high neck top, black patent heels, some geek glasses and also added a pop of colour with her orange clutch.

Another star who went for monochrome was Lisa Snowdon. She wore a black leather zip-detailed pencil skirt, with a black and white shirt and black heels. Hollyoaks actress Lucy Dixon also kept it quite casual in this white dress, mint green Chanel-esque blazer, red sandals and pale pink clutch. Not sure if all the colours should be worn at once and nude heels would have gone better but, bless her for trying!

Ashley Roberts also went for green, she wore this reverse tiger print fit-and-flare dress by Antipodium. The dress has nude panelling at the back which went great with her nude Louboutins.