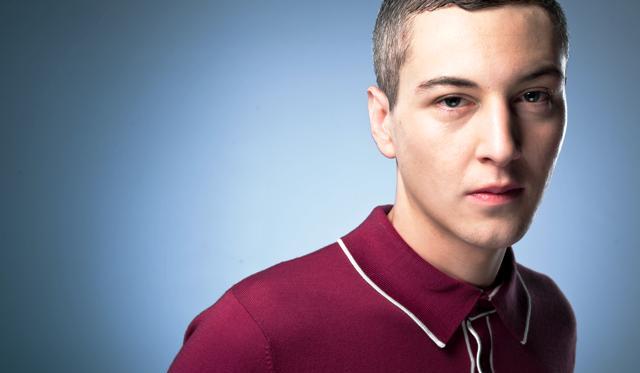 First, a few facts: Born James Devlin, the 23-year-old MC now known as Devlin-or occasionally Dev-grew up in Dagenham, East London. Young James, soon to be Devlin, began his career as a kiddie rapper, working with a collective of grime emcees. In 2008 he managed to attract the attention of The “Louis Vuitton Don” aka Kanye West, who posted a video of one his freestyles on his website. Two years later, he inked a deal with Island Records. He soon enjoyed his first taste of mainstream stardom after releasing his debut album ‘Bud, Sweat and Beers,’ which topped the the UK charts.

Though Devlin is perhaps one of the most down to earth forces in grime music right now, he likes to do things his way. To date he continues to over flood the scene with an around-the-clock flow of releases-some on mixtapes and some as a guest rapper on other’s tracks. He is now ready to unveil his sophomore album to the world, and ahead of its release we interrupted his intense schedule to talk ‘A Moving Picture,’ female attention, insecurities, how he became victim of a death hoax, being mistaken for Pro Green and plans to start designing his own tracksuits.

How would you describe your new album ‘A Moving Picture’? Where does it sit in the Devlin journey so far?

It’s my journey and my life over the last three years. All I can do is write about things in, and around my life, so this is just my character on a CD. It’s been a progression and a journey hence why we called it A Moving Picture. We tried to make the music a bit like film scores, especially with some of the beats sampling classical music. Now I’m here in front of the world ready to be judged again. I can’t wait to hear people’s thoughts on this album.

When we mentioned that we were going to interview you, there were literally a few ladies who swore that they were going to be the mother of your children. Have you grown accustomed to the amount of attention that you get from females?

[Laughs] You know what, it’s not a bad thing. I’ll say that straight up. I suppose as I am in the public eyes it comes with the territory, but it’s a pleasure and it’s encouraging.

We’ve heard stories of ladies flashing their bras before you.

There has been a couple at festivals, but I think there could always be more.

What do you want your overall message to be for those who relate to your songs?

Basically, I am just giving you my life whilst trying to comment on things that are currently going on in my life and in the world. I also have opinions, and I know they are not always right so all I can do is be myself and allow the fans to judge.

How important has Wretch 32, Ed Sheeran and Labrinth been to you as far as a personal relationship and mentorship?

They have been brilliant, especially Wretch, who I came through with on the underground. To see us both achieving success as well as doing good things is great. I met Wretch on Example’s tour along with Labrinth, who I have worked with, and Ed, who appears on my new album. They are just amazing people who I consider as good friends.

Is there anything that you’re insecure or self-conscious about?

Yeah, I think my album as that’s pretty much my life on a disk. Of course, I am going to be nervous and insecure. I am out to be judged again although that’s the industry I am in. It’s what I signed up for, but I think that’s why I care so much about my lyrics. I will never think that I am at my best as I am constantly pushing myself to be better, so at the end of the day I am insecure, mostly about my album. I feel nervous about how the fans are going to receive it, but I think that’s what makes me strive a little bit deeper.

You’re seen as a role model for most young youths caught up in street life. Many look up to you as they can relate to your journey. Anything you’d like to say to them?

It might sound so cliché but as much as there are negative avenues out there if you channel your time into something positive, you can make your journey happen. You may feel like you’re a million miles away from everything you see on TV, but you’re not as you can do whatever you actually want to do. For instance, look at young people shooting videos, SBTV setting up companies and people like Wretch, and I coming through and been successful in our field. Everything takes hard work, effort, dedication and sacrifice but inevitably if you want something that bad you should go and make it happen. Don’t waste your life and forget your dreams.

Is there anything you’ve done that you’d change if you could do it over?

No, I think life is a learning curve. If there are any mistakes, you should make them once and not twice. And I can honestly say that I am happy with the way how I have attacked the mainstream coming from the underground.

I looked at your Wikipedia page and it doesn’t seem to state your middle name.

You know what – that’s my business… [Laughs] That might be one thing that people will never know about me, and I have got to hold onto that.

I recently read an interview featuring Pitbull in which he says, “Pitbull is a product. Don’t get it fucked up—I’m a businessman. This industry is 90% business, 10% talent.” Is Devlin a product?

No, not really. All my boys from my manor and in Dagenham know me as Devlin, that’s who I am. I don’t put on a cape when I go on stage, I just go and spit the lyrics I write and people seem to be appreciating that. To a degree, there’s a lot of crap out there but I wouldn’t say it was 10% talent as that’s a sad way of looking at things, man. Hopefully, in the end talent will prevail.

Have you ever thought of designing your own line of tracksuits?

I might do something like that although not everything is about business, but one day we may capitalize and advance on certain things. I would live in tracksuits if it wasn’t for my management telling me to put jeans and trainers on to go on stage. But as long as I am putting my heart and soul into my lyrics then that’s the most important thing that matters.

Is it difficult living up to expectations? Any sleepless nights?

I am very lucky with the love I have been receiving. A lot of people who have got behind me have helped pushed me to where I am now, and to a degree, I am very thankful for that. At the end of the day, I am me, for better or for worse people will either embrace me or hate me, but I can only give them me.

What’s the most bizarre thing that you’ve ever read about yourself?

I remember someone writing that I had died, and one of my boys turned up at my house at silly o’clock in the morning crying his eyes out…[Laughs] It was quite crazy as I even had my phone ringing off the hook. I really wasn’t expecting to see my boy crying his eyes out though.

What do you do to keep yourself grounded and to remember who you are?

I don’t really need any help in that department as I am just one of the simplest geezers you will ever meet. It also helps as I am always around the people who have made this happen for me, I get called grey hair, this, that and everything under the sun.

How does life look right now through Devlin’s eyes?

When this album comes out and if all goes well, we will have an amazing year on the cards. So at the moment it’s looking very positive as the singles and everything are doing well.

You’ve yet to win any awards. Surely, this is long overdue?

All those awards don’t really mean anything to me. Everyone wins them, but as long as I can sleep at night, I am my own best judge. There is not really a great rap scene out there, so a lot of these people don’t even have the right to judge me or to give me an award.  It doesn’t bother me, as long as we continue to do well and remain successful.

Quick fire. What colour is your toothbrush?

If you could be a fly on the wall in another celebrity’s bedroom, whose would it be?

Carol Vorderman – she’s an old salt, she is!

Which celebrity do you get mistaken for?

People have called me Professor Green, and it breaks my heart as I don’t look nothing like the fella. I don’t dress in Puma, and I think you can recognise my accent anywhere.

You can’t have an ideal woman. They are all crazy.

Devlin’s new album ‘A Moving Picture’ is out now. The single, ‘Rewind’, is also now available.