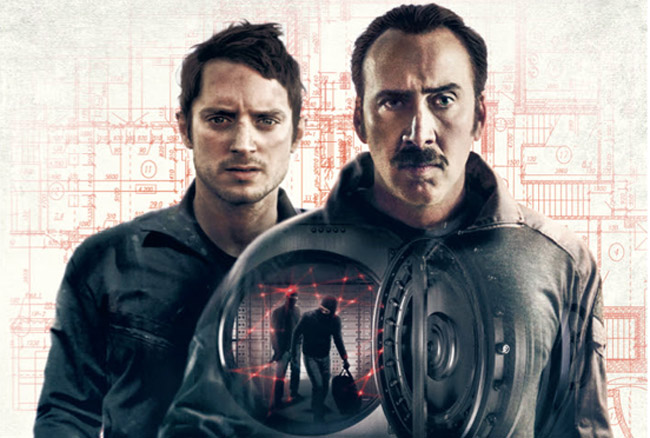 Directors Ben and Alex Brewer are better known on the circuit for directing music videos for the likes of Justin Beiber and Alt-J but The Trust see’s them branch out for their first feature with an insane dip into the world of police corruption resulting in an outlandish and peculiar journey.

Who better than to play completely bonkers but Nicholas Cage whose roles in the past vary from what the hell were you thinking to that were completely inspired, sometimes making you fear exactly what may come from him next.  The Trust sees Cage in his brazenly brilliant insane self, bring to life a bored cop who’s very existent is of no importance to anyone, aided by a completely bewildered Elijah Wood as his partner in crime. Jim Stone (Cage) and David Waters (Wood) are two hapless police officers working in the administration offices of the Las Vegas Police Department, they of no real importance. Both are bored with their lives and Waters has the added misery of a relationship breakdown with his wife to contend with. However, when they learn of a heroin dealer paying an extremely high bail price with ease they take it upon themselves to find out exactly where this cash is coming from.

It takes Stone some convincing to get Waters along for the hilarious ride which doesn’t quite go to plan – but he does nevertheless reluctantly agree to join his partner which sees them put their detective hats on to uncover a vault in the freezer of a store which they proceed to hatch a plan to rob.

The Brewers are very much inspired by 70’s American cinema and this is ripe throughout with its dark and seedy ambient tones. Even though the story is complete fiction they have taken their inspiration from a spate of incidents that occurred in the Boston Police Department from the 60’s all the way through to the 90’s and the corrupt men who were behind them. Only in America! There are numerous moments that are completely bizarre, yes coming from Cage’s character, from sucking on a lemon slice soaked into tabasco sauce to adding a dick photo to a bundle of photographs Water’s sifts through as they plan the robbery. This light hearted tone doesn’t last as the pair gets deeper into their plan the story also gets increasingly sinister and dark. It isn’t until they actually embark on the heist it loses its momentum and the laughs dry up along with Water’s having an attack of conscience and realising he is in way over his head.

The Trust hits cinemas and VOD May 27.