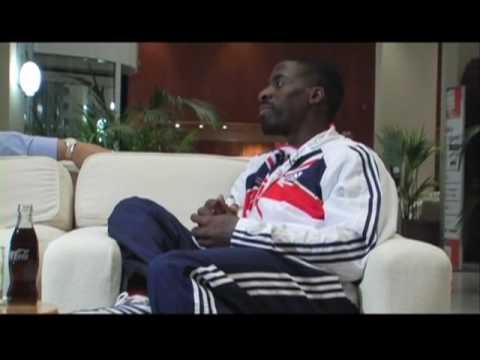 We all come to a crossroads in life where everything goes, and what defines a person’s character is how well they pick themselves up from that. It’s that attitude and drive that has given controversial sprinter Dwain Chambers the impetus to propel himself forwards and put his troubled past as an athlete firmly behind him.With the release of his autobiography Race Against Me, it’s a chance for Dwain to give his side of the story concerning his ban for using performance-enhancing drugs that has turned into a battle of words with the media and the athletics world.

Dwain has been the subject of wave after wave of harsh criticism and has arguably been made the scapegoat for the demise of British Athletics. However the 30-year-old sprinter has vowed not to let the callous criticism he’s received get the better of him.

Sporting a “2000 and mine” T-shirt, Dwain has stopped looking back at his troubled past and has his sights set firmly on success in the future.

Time for change
‘2009 is a positive year for me and everybody, we have been blessed with a positive already with Barrack Obama being the first black president, so it shows good times are ahead. For me, I’ve got to focus on the positives and take advantage of what’s available, and obviously my running comes first.’

With the release of his autobiography Dwain now has a platform to give his perspective of his reasons for taking performance-enhancing drugs, the emotions he was going through whilst being banned from a sport and offers his fans a truthful account of his highly controversial athletics career.

‘A lot of stories that have been illustrated about me are stories that don’t have much weight in terms of illustrating the truth… When you read things and listen to things from people that don’t portray you in a positive light then it suppresses you, so I don’t listen, I just brush it off, I’d rather put my energy into something positive.’

Good support network
Becoming a father and having the support of a loving partner, Dwain knew if he bowed out from running then he wouldn’t just be failing himself but the people around him and the sport he so dearly loved. ‘I was faced with a situation where if I didn’t pick myself up from the floor then I would be gone, and that hurt me.

‘Imagine having nothing, absolutely nothing. I would be letting down myself, my family my kids. I’d rather be remembered for something positive than negative. I’ve got a god-given talent, we are all put on this earth to do something, were not just here to make up the numbers so there’s no point wasting it.’

Negative media pressure
With the negative media pressure it would have been easy for the north London born sprinter to have taken the wrong path after he was banned from competing but, ‘I had to face my demons,’ he states. ‘Even though I was out of the sport, I continued watching it. There were opportunities for me to go out and rave and that wasn’t benefiting me, it wasn’t keeping me focused, if anything it was directing me towards a life that was only going to end up getting me in trouble, and I was already in trouble.’

Using time wisely
Getting in trouble was putting it mildly. The truth behind that statement was to herald a dark period for Dwain, but he took it in his stride, determined to make the most of his situation. ‘I was in jail, I had to sit down and do my time for two years and it killed me,’ he says. With time out from the sport that he had put everything into, Dwain decided to use that time wisely.

‘I used that time out to educate myself, I started to read more and I got qualifications in sports science. I didn’t just sit there and bum around.’ It’s certainly been a tough ride for Dwain, but his determination, support from his family and sheer love for the sport has seen him bounce back in the face of adversity. There’s a lesson there for everyone.

Dwain Chambers – Race Against Me is published by Libros International and is out now and available from all good book shops priced £18.99