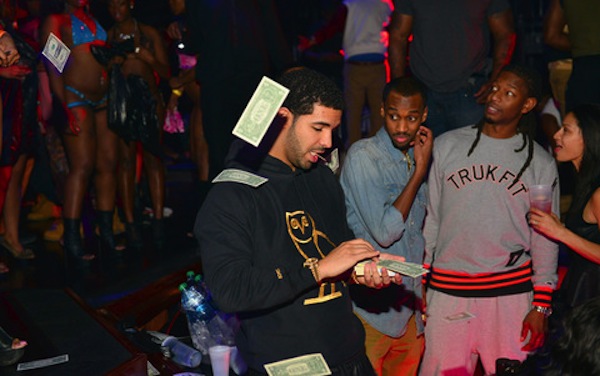 Rapper Drake is apparently attempting to hit back at a club in Los Angeles that rejected him last month – because rival Chris Brown was already inside. According to TMZ, the Young Money star spent $50,000 on strippers at the Cameo Nightclub in Charlotte, North Carolina last weekend.

Drizzy is said to have allegedly brought cardboard boxes filled with stacks upon stacks of one dollar bills. “We’re told another rapper named Bleu Davinci chipped in an additional $25, 000,” TMZ says.

Drake reportedly took the notes out of the cardboard box and made it rain, covering the entire floor with $1 bills. We are uncertain as to how these photos of the rapper hurling such ridiculous amount of cash on naked dancers will benefit his image, but we are pretty sure no other club will ever deny him entry again.