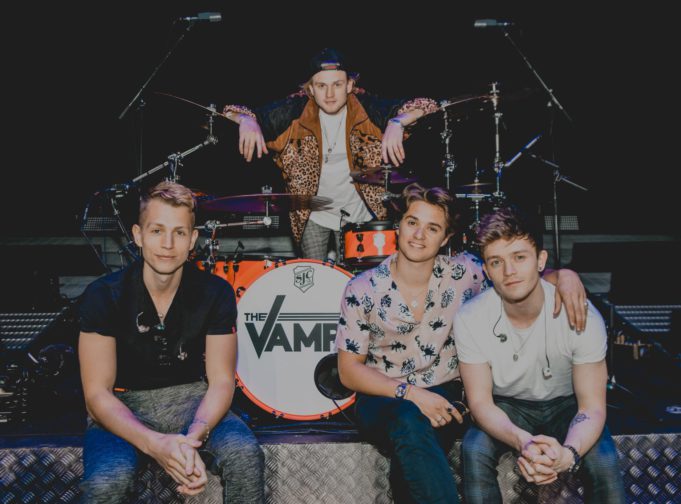 This week London has been lucky enough to receive some extremely hot weather and I decided to sit down with Connor and Tristan from The Vamps on a rooftop in Kensington looking over the city of London… the perfect interview location, Am I right?

The Vamps have just finished their tour playing in some of the UK’s biggest Arenas including the world famous O2 Arena.

You’ve probably been asked this a million times but why ‘The Vamps’?
T- I actually wasn’t in the band when the name was made up.
C- It was James and Brad who created it and I think they don’t even have a reason, to be honest. We just liked the word.
T- James actually really likes Twilight and Vampires! He really likes Edward Cullen so maybe it came from that.

You guys have been going for over 6 years now? How does this feel? Has anything changed or remained the same since you first started?
T- It feels so good, doesn’t it?
C- Totally!
T- We’re on our fifth tour as well and we keep on travelling the world and releasing music, which is what we love to do! Can you tell me about your new album?
C- It’s the ‘Day Edition’ of the ‘Night and Day album’! We have a few collaborations on there such as Maggie Lindermann and Machine Gun Kelly and we’re really excited about it as it’s more instrument driven than our last half of the album.

What is your songwriting process like?
T- Very relaxed for ¾ of the studio time and then we actually do some work in the last couple of hours.
C- That’s normally when the ‘Gold’ comes out.
T- We sometimes work throughout the night.
C- During the night is the best time to get something written.

Do you have a favourite track from your new album?
T- I like ‘Time Is Not On Our Side’
C- Yeah me too! I’d probably say that one as well.

What song from your new album do you hope will be a ‘fan fave’? {Fan question @rovamps}
C- Good question! Yeah probably ‘Time Is Not On Our Side’.
T- yeah I’d definitely say that too. If you could collaborate with anyone, who would it be?
C- Steven Tyler and Mason Ramsey.

Looking back from your first concert to now how do you feel you have grown during this time?
C- I hope we’ve gotten better at being musicians.

You’ve hit the stage a ton of times at this point and we know things don’t always go as planned. Is there any embarrassing on stage screw-ups that have stuck in your mind?
C- For me, probably falling off it! I’ve done that many times actually! I’ve ripped my knee.
T- Oh for me, it was saying “I can speak Spain” in Spain instead of saying Spanish.

What has the fan reaction been like this tour?
C- Amazing! Probably the best we’ve had! There hasn’t been one bad show.

I think it’s fair to say many of your fans fall into the category of ‘die-hard’, that must be quite intense?
T- It’s amazing how dedicated they are! People have been coming to our shows for the past five/six years so we understand not everyone has a lot of money so we tried to bring prices down so they can get to our shows! 3Opercentt of tickets are under a tenner.

Do you think you have achieved everything that you aspired to when you first started?
T- To be honest, yeah!
C- Totally!

What is the most important thing you’ve learnt as a band?
C- Stay tight as a unit because you hear so many stories and we’re lucky that we get on.

What is the strangest thing a fan has ever given you?
C- Body Hair.
T- Yeah someone gave me her pubes in a box once and a used tampon

What’s next for The Vamps? Will we see another 6 years?
T- Six years? More Like Sixty Years! We’d probably playing in at that age.