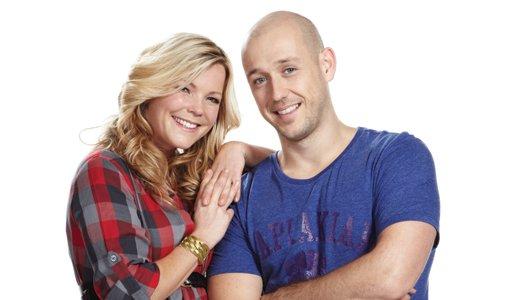 Dan Kelly is Capital FM’s breakfast presenter broadcasting across Birmingham every morning between 6-10am. His far above the ground energetic and quirky personality, are instantly recognised having been fronting the show since its re-launch earlier this year. Also alongside him is his dazzling co-host Katy, who is also responsible for waking up over 470,000 people who listen to the station each week. Packed with non-stop banter, celebrity guests and chit-chat, we spent the morning with Dan and Katy to find out what it takes to make it in, to radio as well as getting the low down on their favourite celebrity guests, falling a sleep on air and much more.

How did you first get in to radio?

Dan: There was a station at my collage, and because it was something that I always wanted to do I used to sit in my bedroom as a youngster talking into a stereo which recorded my voice. After realising it was a lot of fun, I started sending out demos every week around to stations across the country as well as bugging people before eventually getting a break to do some work experience at Choice Fm which then became Galaxy and is now Capital. So a lot of practicing, banging on doors and networking will get you to where you want to be in this industry.

Katy: I started working in the Marketing Department at Galaxy in Leeds before moving to Brighton to do a bit of work in Television. A friend of mine who used to work with me came here to Capital back when it was known as Galaxy, and asked me if I still wanted to present. I was like yes, and after coming in for an interview, I got the job.

What’s a normal day like for both of you?

Dan: I get in to the studio between half five and six while Katy usually arrives around half seven and eight… [Laughs]… We normally plan the show a day before which means after each show we’ll have a meeting instead of just turning up and talking rubbish in the microphone. I would say the best way to describe it is that it’s planned spontaneity.

Katy: We sort of know the subjects that we want to talk about but we don’t script it, for example, we were chatting earlier about a parachute jump which I’ll be doing and from that we build our banter.  We like to have a laugh and not take it too seriously because we’re quite lucky to sit here chat a bit of rubbish and play records.

How easy or difficult do you think it is to get in to radio nowadays?

Dan: It’s a lot harder than it’s ever been. Nowadays, there are fewer local stations around so it’s the job of community stations and internet stations to bring through new talents. I don’t think it’s ever been this hard because ten years ago, I had to go oversees to get a job, but you’ve just got to keep going.

Katy: Furthermore, be prepared to start at the bottom making tea and doing whatever you can as well as expecting not to get paid, and working very long hours to show your dedication.

What are your chances of been a radio presenter based on? Is it your voice, looks or your presenting skills?

Dan: It’s nothing to do with your voice instead its all about what happens when your mouth opens and how many people can relate to you. Not everyone is going to like you but just don’t take it too seriously.

Katy: Because its radio it doesn’t matter about your looks, but with me, I’ve got quite a husky voice which kind of helps. It’s more or less all about your banter and connection with the listeners. Dan and I are quite different, but we get on and its gives us a buzz.

You’re constantly playing different kind of songs but is there a particular one that would best describe your life?

Dan: For me it would have to be Jason Derulo – Don’t Wanna Go Home.

Katy: [Laughs]…Supergrass – We Are Young.

What’s the common misconception of you?

Dan: Everyone usually thinks that I am really fat which I am not.

Any embarrassing or unforgettable on-air moments?

Dan: I fell asleep once on air because I was really knackered and was woken by a very angry boss over my shoulders.

Katy: I fell for four separate April fool jokes within the space of one show, which was really crazy.

You have interviewed some of the biggest stars in music, who have been your favourite guest?

Dan: One of my favourites was interviewing The Saturdays, on Valentines Day, which meant that they all had to spend time with me instead of their boyfriends.

Katy: The boys from The Wanted are also really nice to chat with.

What advice would you give to anybody wanting to make a career in Radio or even with Capital FM?

Dan: Keep showing your interest as well as offering to help out and getting involved with as many local stations as possible. If you can get paid for it, then that will be a bonus, but you’re looking to do a lot of free work for a while as that’s what people have to do to get noticed. It’s also who you know, what you know and making sure people are aware of you.

Katy: If you’re committed and people get to know your face, then they’ll get you to help out and do things for them. If it’s something, you really want to do then you must stick to it.

You can catch Dan and Katy on Birmingham‘s Number 1 Hit Music Station, Capital FM every weekday. Or check out www.capitalfm.com/birmingham/on-air/breakfast/