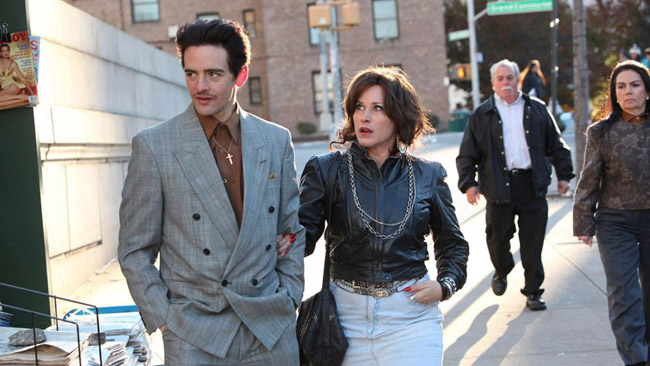 Gangsters and mobsters are the subject of a whole host of classic films throughout cinema.

A world far from the average, these crime bosses and their ‘families’ were cool, powerful, and menacing. The idea of watching these people’s stories on screen was compelling.

These archetypes aren’t fairytale, though. Many were derived from real people and were telling their true stories. The Wannabe, directed by Nick Sandow (known best for his role as Joe Caputo in Orange is the New Black) combines both sides of concept. Based partially on true events, the film tells the story of Thomas, a man fascinated with gangsters and the ideology behind them, and his girlfriend/wife Rose as they meddle with the New York Mafia.

The film, set in 1992, introduces Thomas as a wide-eyed young man intensely following the trial of John Gotti, the boss of the Gambino crime family of New York. He idolises mob culture and we see as he tries desperately to fit in, talking about John as if he’s family and shouting after him at a street party. It’s here he meets his girlfriend and partner in crime, Rose.

Thomas and Rose’s relationship is gripping from the get go. Rose seems wiser than Thomas and his obsessions are alarming. Yet the pair click and both continually show vulnerability and strength with each other.

It’s these characters that make The Wannabe unique to other films in the genre. Whilst still having the thrills and tension, the story is told from the outside looking in, as if Thomas is the audience watching the Mafia world he attempts so hard to be a part of.

Him and Rose’s adventures in love, drugs, and stealing from the Mafia have depth through the brilliant performances by Vincent Piazza and Patricia Arquette (practically unrecognisable). Very little time is spent with these characters being away from one another and yet their reactions and emotions between them tell us their differences and what they want respectfully, without this time to explore them individually.

While The Wannabe may not hold qualities such as the grandiose of predominant mobster classics, the characters of Thomas and Rose are intriguing and memorable: reminiscent of Bonnie and Clyde crossed with Romeo and Juliet. The story surrounding them may not be eventful but they are stars of their own show.

The Wannabe, released on November 7th, is available to pre-order now through iTunes, Amazon and the following platforms: