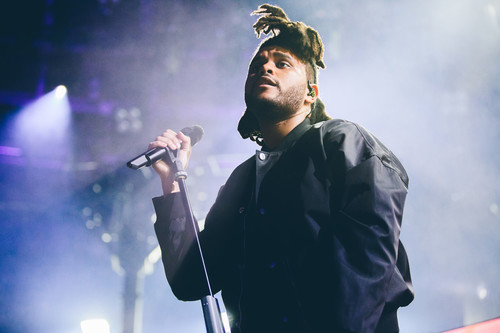 For the first time since going number one with ‘Beauty Behind the Madness’ The Weeknd (aka Abel Tesfaye) brought his unique brand of sexuality to the UK; playing at the recently rebranded iTunes festival at London’s Roundhouse (Wednesday 23rd September.) Tesfaye focussed the majority of his set on Beauty Behind the Madness, opening with mesmerising album track Prisoner, before quickly launching into an incredibly energetic performance of Losers for a bouncing, beer-covered and awestricken crowd. Backed by a three-piece band on a raised platform behind him; Tesfaye confidently captivates his audience by flitting between slow and sexy R&B hits such as Often and The Hills, and upbeat pop songs like I Cant Feel My Face and Crew Love. You’re never left to subconsciously submerge yourself into any one vibe for too long, if there’s one thing The Weeknd is, it’s not boring. Tesfaye has the audience in the palm of his hand from start to finish with his stunning vocals, seductive lyrics and enviable conviction; he may have been alone on that stage, but he owned it.