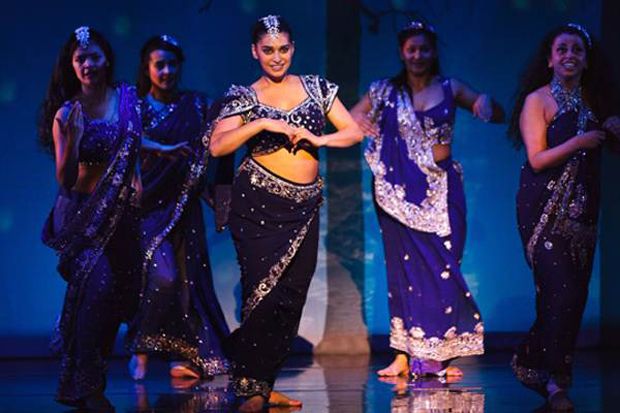 Stratford; the perfect place to disappear. 17 year old Sita has fled her oppressive life in Leeds and come to London to seek her fortune as a dancer in the famous Wah! Wah! Club.

But this young upstart’s preference for bump n grind do not hold well with steely club owner Soraya, and the budding romance between Sita and her gawky son Kabir impresses her even less. With the support of the Wah! Wah! Girls and the advice of Auntie Bindi will love finally conquer all? Will we discover the terrible truth lurking in Soraya’s past? And why is everybody eating hula hoops? With stunning choreography, tangled plots and lashings of tongue in cheek humour Tanika Gupta’s new musical is certainly entertaining. The production abounds with colour from the swirling saris to the dynamic set. Keith Khan has produced a bustling London backdrop crammed with red buses, shop fronts and gangs of prowling hoodies. Sophiya Haque is magnificent as the obstinate business woman Soraya. Her skilful portrayal of fierce independence and a haunting back story are matched by a silvery voice and graceful dance moves. Other notable performances herald from Gurpreet Singh who plays the villainous Anish, Singh embraces his role with deliberate over posturing and booming declarations. Bindi played by Rina Fatania is the darling of the production; comical yet wise she observes all from the comfort of her lazyboy chair which she launches herself into gleefully. The songs are a mixture of Hindi classics as well as new numbers which are all performed with zeal by the cast. Spontaneously bursting into synchronised dances which range from storytelling Kathak sequences to modern Bollywood routines the energy on stage is incredible. Overall the cast appear to be performers rather than actors; their dancing skills are flawless and their spirited harmonies are executed perfectly, but the plot is conducted largely through the musical acts. Moments of poignant dialogue do tend to feel rushed and undeveloped. By combining the farcical elements of Bollywood classics with the urban lifestyle of London Gupta boldly presents British Asian culture to a mainstream audience. No small feat! Whilst successful in this endeavour the culture presented is a little homogenised with the characters simplistically demonstrating Sikh, Hindu and Muslim traditions concurrently. Whilst not a gripping piece of theatre Wah! Wah! Girls is a brilliant spectacle and a fantastic example of the multicultural world that Londoners call home.

Wah! Wah! Girls is showing at the Theatre Royal Stratford East until the 26th of September.