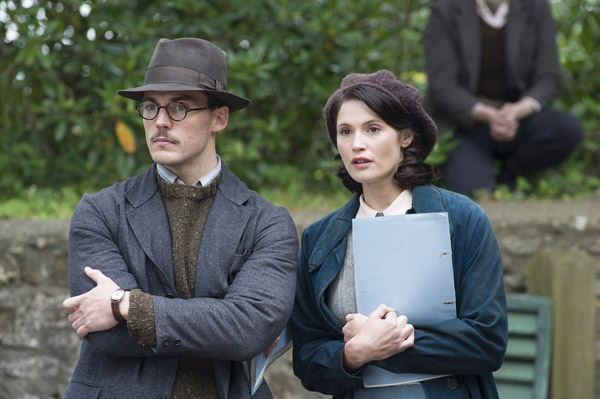 Morale boosting movies for the home front, romance and a scene-stealing ham actor.  But do they turn Their Finest into British film making’s finest hour and a half?

You’ll excuse the literary reference.  New release Their Finest is based on Lissa Evans’ book, Their Finest Hour And A Half, all about the efforts of the Ministry Of Information to make propaganda movies to keep people’s spirits up during the darkest day of World War II.  And a very British production it is too, with Gemma Arterton, Bill Nighy and Sam Claflin in the cast, as well as Lone Scherfig in the director’s chair, she of An Education and The Riot Club fame.

The film is a winner in the charm stakes but little more than a runner-up when it comes to its story.  Copywriter Catrin (Gemma Arterton) is recruited by the Ministry Of Information to work on scripts and give their propaganda films a feminine touch.  As she immerses herself in her job, and one film about Dunkirk in particular, her confidence grows and she wins the respect of her colleagues – especially another writer and an ageing actor.

There’s a moment in the film when one particular line of dialogue sits up and begs you to notice it.  Not because it’s laden with significance or is particularly good, but because it’s deeply ironic and nobody noticed at the time the film was being made.  Sam Claflin has the dubious honour of delivering it.  He’s mulling over the love people have for the movies, as a form of escape from the hardships of real life at the time, and he wonders if he’s given his audience something worth an hour and a half of their time.

It comes roughly half way through the film so, if the audience haven’t been asking themselves the same question so far, they most certainly are now.  Even though it has so much going for it – the cast, a director with a reputation plus a strong sense of period.  It’s a comedy drama – forget the descriptions of it as a rom-com – with a gentle but perceptive sense of humour.  The romantic side of things plays a part in the later stages but is a disappointingly unconvincing bolt-on between two people who are complete opposites and don’t have much in the way of genuine chemistry.

At times, the film flounders, which gives it a frustratingly uneven feel.  Because there are equally times when it completely hits the spot, works like a charm and wins you over with a large helping of thoroughly British charm.  And does it so well that you long for more consistency.

Alongside the names at the top of the cast list are the likes of Jeremy Irons, Richard E Grant and Eddie Marsan, although only some of them get a real chance to show what they’re made of.  Helen McCrory is a knock-out as Bill Nighy’s agent with a razor sharp business brain – and something of a soft spot for her client.  But it’s Nighy as the past-his-sell-by-date actor who steals every single scene he’s in, especially in the propaganda movie where his character delivers a honey roasted performance.  All he needs is some mustard on the side.

The propaganda film also includes an import to persuade the Americans to become involved in The War.  It may also help with Their Finest’s distribution in the States.  Jake Lacy (Christmas With The Coopers, Carol) turns up as famous American war hero with zilch acting ability and a big toothy grin as his only attribute in front of the camera.  And he delivers a great comedy turn.

Their Finest manages to stay on the right side of having some substance, but only just.  It’s charming and nostalgic and, to answer Claflin’s question, it’s worth an hour and a half of your time – but only just.

Their Finest is in cinemas from Friday, 21 April.