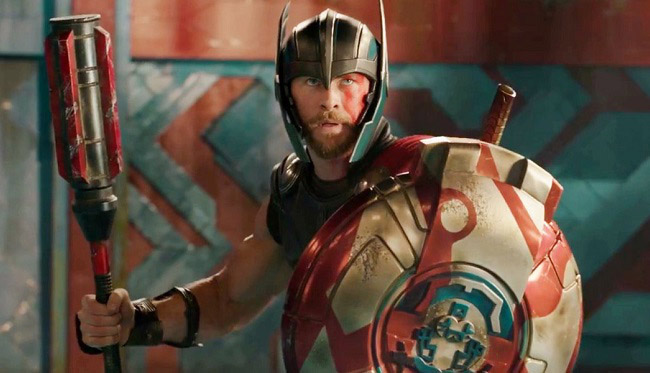 It’s been four years since the burly Norse god and friends last graced our screens, with a complete change in direction in a choice of a director with Hunt for the Wilderpeople’s Taika Waititi taking the helm, an air of anticipation arose how the third in the saga would pan out. Fear not, Waititi and his slapstick sense of humour have delivered a major service to the dark and deary marvel superhero movie and thrown in some vibrant colour to finally invoke the power of life in one of the best comic book superhero movies of the year.

Ragnarok takes place after the events of Avengers: Age of Ultron, where Thor (Chris Hemsworth) had the vision of an apocalypse – That vision soon becomes a reality to his home planet of Asgard when He, alongside the slippery and devious Loki (Tom Hiddleston), discover they have an evil big sister in Hela (Cate Blanchett), who is on the warpath after escaping prison to take her rightful place on the throne of Asgard. Faced with the biggest battle of his life, Thor and Loki don’t quite make it through round one and end up stranded an intergalactic rubbish dump planet, Sakaar. Eager to escape the madness of Sakaar and it’s completely bonkers Grandmaster played by Jeff Goldblum in his naturalistic state of peculiarity, Thor, after his battle with his ‘friend from work’ Hulk, Loki and a few new friends vow to save Asgard.

Marvel have truly embraced Waititi’s flamboyantly eccentric vision for Ragnarok, trusting a filmmaker who has never worked on a film of this magnitude with such a big budget to play with could have been a major disaster for the studio but the gamble has paid off with camp generosity whilst never taking itself too seriously, an area in which it failed in its predecessors. Think Guardians of the Galaxy on laughing gas with a few magic mushrooms thrown in for that extra dazzle, Waititi never shying away from the small detail either, letting his creativity flow like a vomiting rainbow.

Hemsworth steps up his comedic turn of all brawn with not much between the ears and pulls it off with gut cramping perfection from the moment the film opens only enhanced by the budding bromance that develops with Mark Ruffalo’s Hulk/Bruce Banner. Tom Hiddleston’s untrustworthy Loki is still the funniest character on the cast with his disgruntlement and one-off quips. Tessa Thompson’s alcoholic and bolshie Valkyrie, the only surviving Valkyrie from Asgard, has all the hallmarks of a bad ass female hero, just as agile and deadly as her male counterparts.

Then we have Cate Blanchett’s Hela, evil personified oozing from every pore reminiscent of Disney’s Snow White Evil Queen, but hitting catastrophic levels that prove an even tougher match for Thor’s mighty hammer. Taking evil to a whole new level of malevolence, Blanchett’s villain is the straight man to Waititi’s silliness. However, the film/scene stealer comes from an unknown character Korg (Played by Waititi), a creature made of rock but with his thick softly spoken kiwi accent has some of the stomach punching gags that wrench out the real belly laughs.

Humour is no stranger to a Marvel movie, but Waititi takes it to a whole new level and does the franchise a major service. Thor: Ragnarok is an eye-popping, spectacular with a few surprising cameo’s; it’s a Hela lot of fun.

Thor: Ragnarok is out in cinema’s October 24th.