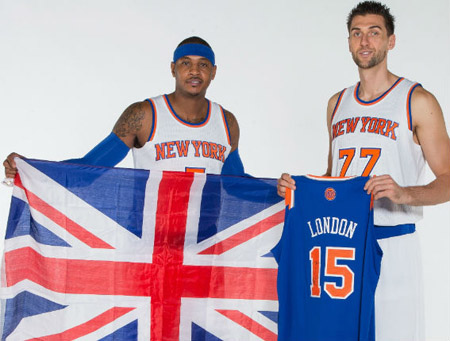 Tickets for NBA Global Games London 2015 featuring the New York Knicks vs. the Milwaukee Bucks will go on sale Friday, Oct. 31 at 9.a.m, it was announced today. The game, which will be played at The O2 on Thursday, Jan. 15, 2015, marks the fifth NBA regular-season game to be played in London in as many years.

The New York Knicks are led by seven-time NBA All-Star and two-time Olympic Gold Medalist, Carmelo Anthony, together with six-time NBA All-Star Amar’e Stoudemire. The team also features five international players, such as Andrea Bargnani of Italy and José Calderón of Spain. This season will see five-time NBA Champion Derek Fisher make his head coaching debut, alongside Knicks President and NBA coaching legend Phil Jackson, appointed in March. This will be the Knicks’ second trip to London, having played in 2013 against the Detroit Pistons. The Milwaukee Bucks feature Brandon Knight who led the team in points per game, assists and steals last season, and Jabari Parker who was the second overall pick of the 2014 NBA Draft. The team also features four international players, such as Giannis Antetokounmpo of Greece and Ersan Ilyasova of Turkey. This will be Head Coach Jason Kidd’s third trip to the capital for a regular-season game, having come with the New York Knicks as a player in 2013 and again last year as head coach of the Brooklyn Nets.