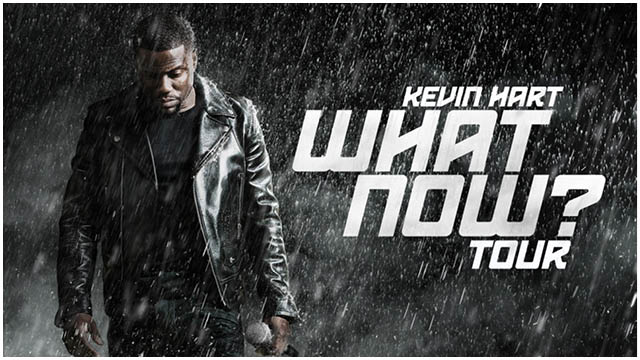 After his sell out ‘Let Me Explain‘ UK, Kevin Hart one of the foremost comedians and entertainers in the industry today, will be bringing his hugely successful ‘What Now?’ tour to The O2 on Sunday 24 January 2016.

Tickets are ON SALE NOW and are available at www.ticketmaster.co.uk/Kevin-Hart-tickets

Ya’ll should be afraid of what I’m gonna do next….. I suggest you buckle up …..Shits about to get Real!!!

Hart began his career sizing men and women for footwear, when a chance, electrifying performance at amateur night in a Philadelphia comedy club changed his life.  Kevin quit his shoe salesman job and began performing full time at such venues as The Boston Comedy Club, Caroline’s, Stand-Up NY, The Laugh Factory, and The Comedy Store in Los Angeles.  However, it was his first appearance at the “Montreal Just for Laughs Comedy Festival” that led Kevin into roles in feature films such as Paper Soldiers, Scary Movie 3, and Along Came Polly opposite Ben Stiller and Jennifer Aniston. In 2012, Hart was tapped to host the 2012 MTV VMA’s, garnering much industry praise for his appearance, before his next comedy tour, “Let Me Explain” took him to 90 American cities along with Europe and Africa.  Records have not withstood under his LME tour either, as Kevin became only the second American in history to sell out The O2.

In September, 2011 Hart released “Laugh At My Pain,” the feature film version of his comedy tour (under the same name).   The movie grossed over $7 million, and was 2011’s most successful film of those released in less than 300 theaters.

As well as live stand-up, Hart has an impressive list of film and television credits including, Top Five, alongside Adam Sandler, Jerry Seinfeld and Whoopi Goldberg, Screen Gem’s The Wedding Ringer, Get Hard opposite Will Farrell, Ride Along, Paper Soldiers, Scary Movie 3, Along Came Polly, hosting BET’s classic stand-up comedy series Comic View: One Mic Stand, ABC’s The Big House, which he also executive produced and wrote, and recurring roles on Love, Inc, Barbershop, and Undeclared.

Already being touted as the most successful comedy tour in history, the ‘What Now? Tour’ has seen Kevin Hart continue his run of smashing comedy box office records across the US. Selling out 53,000 tickets out at Lincoln Financial Field in his hometown of Philadelphia, made him the first ever comedian to headline and sell out an NFL Stadium.

Tickets are ON SALE NOW and are available at www.ticketmaster.co.uk/Kevin-Hart-tickets