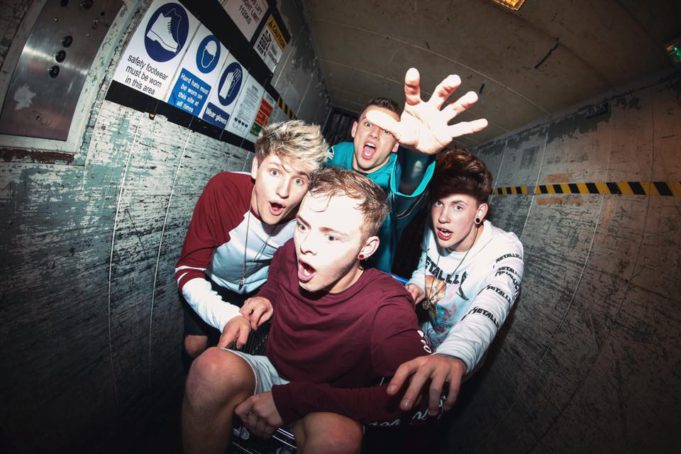 Everyone kept asking me when I was going to interview The Tide. I done some research, listened to their music and finally got the chance to sit down with them and ask a few questions.  Austin, Drew, Levi and Nate gave me an insight in what happens on tour and what they miss most about being away from home.

Is The Tide the new One Direction? We’ll only have to wait and see. The lads will continue touring with The Vamps next month.

A – We all met online basically through youtube! The Vamps contacted me at the beginning! They wanted to put a band together for their label. So we went through Facebook and youtube, then we eventually found these guys! They were in a band together and we convinced them to leave and join us! Levi was already doing acoustic covers online, he done some cool songs that we were impressed by! We flew him out and we all got on really well!

What was your inspiration for your album?

D- it’s basically a bunch of personal experiences that we saw on tour and have gone through. The whole album is about everything we’ve experienced and just our thoughts on things.

What makes you different to other bands in the industry?

N- I would say our live show; it’s like an upbeat randy show. There’s a lot of punk rock, rock n roll, the full band experience.  We have a lot of jumping and I love to involve fans. I think we are really personal with our fan base.

What’s the best thing about being in The Tide?

L– we have toured the world, so that’s a plus! The fact that we have so many fans everywhere and they are honestly the best fans ever! They are very passionate.

What’s been the toughest moment of your career so far?

I think being away from home when things happen.

What’s the best thing about touring?

One place you would like to tour, where you haven’t been already?

A- we were in Spain, playing on live TV and Drew and I were going to do our first jump but there was water on the stage. As soon as I jumped, I slipped and fell on my butt! Drew just leaves me and runs away and doesn’t even care. The next day in was in a magazine and I was so embarrassed but it’s ok because Iggy Azalea fell too.

D- Nate has a really bad habit of being ugly all the time, he can’t help it!

So you’re touring with The Vamps, who is your favourite member?

D- I hangout with Connor a lot, I get on well with him!

I’m close with all four of them but I think we have hung out the most with Connor and Tristan. They have been working on some songs with us!

A- For us, we’re going to keep pushing this singe and releasing more music. The album is written and ready to go! So it will just the process of touring and getting our music out at the right time!