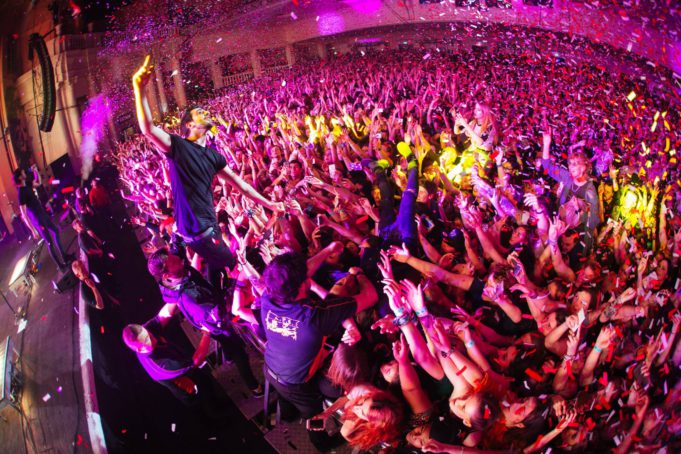 Finishing their hugely successful headline tour on Friday night at O2 Academy Brixton, All Time Low is my new favourite band.  For those who might have been living under a rock for many years, All Time Low consists of band members Alex, Jack, Rian and Zack.

Starting off the show with a fantastic performance from the new pop punk band, Waterparks. Before seeing Waterparks, I had heard great things about them from a friend, unsure whether she was being bias or not, I wanted to see if they lived up to my expectations…. They certainly did! I was amazed at how much not only I but also the audience enjoyed their performance. As Waterparks are a small band (only three members) I was impressed how they carried themselves across a big stage, I mean that can’t be easy! Lead Singer Awsten pumped up the crowd who was eagerly waiting for All Time Low, I wish Waterparks had a longer set; they’re a band that I’d definitely pay to see and one to watch!  Thanks ATL for introducing me to them! Followed by Waterparks, SWMRS took to the stage! We’re still unsure what their band name stands for, they were great as expected and the crowd seemed to love them.

A few seconds before ATL come on stage, the lights dim. They were greeted by ear piercing screams. Performing their new track, ‘Dirty Laundry’, the crowd went insane! I was amazed that almost everybody knew the lyrics even though the track only came out a few weeks prior! Alex announced that they would be releasing a new studio album in June…eeek we’re so excited! The lights went green and Alex proclaimed they were singing a cover, green light by Lorde! This was one of my favourite moments of the evening. Such a great cover, I need this in a studio version!

All Time Low definitely knows how to put on a show; I mean they’ve been doing this right all these years!  I can see more great things coming from them and I keep wondering if they’ll ever take a break, I hope not!