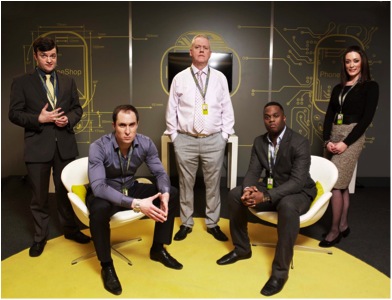 Andrew Brooke, Javone Prince and Emma Fryer, three members of the cast of the critically acclaimed and multi-award winning comedy series PhoneShop to talk about the third series which hits our screens later this month. With more pressure than ever to sell (and mis-sell), the staff of PhoneShop, Sutton need to be completely focussed and at the top of their game. Here’s what they had to say.

Are any of you really like your character in real life?
Andrew: Not at all, I think it is fair to say Ashley doesn’t give much support to people. He is quite selfish and thinks of himself. I try not to do that.
Javone: No. I’m a humble guy… I guess there are little bits of me in there, tiny little bits of Jerwayne that come through.
Emma: I wish I had Janine’s wardrobe as she’s got the confidence – there is always a bit of Doris Day in there. I also wish I had her positivity as she always fails and things go wrong but she always resets – the next day is going to be the day it will change. Is filming on set as fun as it looks?
Andrew: I have worked for Phil, who produces the show, for years and we used to do bits of writing together. Nothing I have ever done with him over the last nine years feels like work. It’s totally unlike any other job you would ever do. We have to bang it out pretty quickly and we’re up against it but at the same time it all feels like there is a relaxation to it.
Javone: I hate it. I hate everyday getting up at 6am and getting in the car with the same driver and listening to his radio and seeing these horrible people. They bully me… I joke, it’s amazing! It is so much fun.

Do you improvise once you are in the flow?
Andrew: Improvisation is key to this. I write stuff at home and bring it in so effectively you are working as writers, actors and script editors as you are being asked to come up with stuff. I would say it’s fun all the time.

Have you ever had a job in sales?
Javone: Yes. I used to work in Dorothy Perkins and Barratts. When the thong came out they would sell three thongs for a fiver and I used to work on the tills and I used to giggle so much when they brought their thongs to the till. I got kicked off tills and moved to changing rooms. Holding thongs and giggling at the women wasn’t good.
Andrew: I sold bread, ad space and furniture. Nothing that is really comparable to this.
Emma: I did retail, it was really nice. I started when I was 16 in a woman’s clothes shop. All my colleagues were women who were my mum’s age so it was me being in the adult world. I loved it!

Who do you think would be the best sales person in real life?
Emma: Martin. He can be surprisingly charming and can just turn it on – and he’s honest. He is frighteningly charming. He has got an elegance about him. He is the older silver fox. I would be a mess.

Does your ‘phone play an integral part of your life?
Andrew: I would say they do in most people’s lives because, as an actor, you are your own business. You’re having to look at emails on your ‘phone – they are essential. Social media, however, I could live without. I just need it to make calls and emails.

Who do you think would be the best sales person in real life?
Andrew: Emma. I think she’d have the touch. She’d be very good. I think people would find her very charming. But Martin trumps it overall. He covers all bases. Is he lying to me now? What is the real story? Who is the real you?

“Ashley ends up just as arrogant and stupid as he was at the start of it.”

Are there any hints you can give about what’s coming up this series?
Andrew: Generally you will see some stuff that goes right back to the essence. Things where you’ll be really surprised. Ashley ends up just as arrogant and stupid as he was at the start of it.

Do you get recognised?
Andrew: Yeah, PhoneShop is quite a cult thing. It can happen at random times and you can be really surprised. The demographic can surprise you. The show has a really wide demographic.