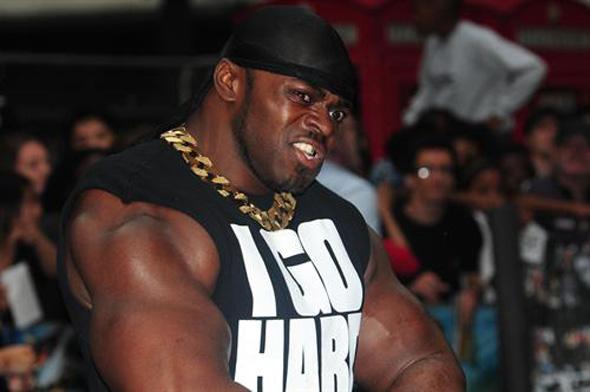 Ever wondered how 29 year-old Tiny Iron exploded onto the scene with his 24 inch muscles? Well it all started when he was in a club and Vinnie Jones said “Fancy doin a movie?” Tiny’s reply? “Hell yeah!” And a well defined star was born… You are anything but tiny, how did you come up with the name?
The American’s called me ‘Tiny’ when I use to bodyguard. And many people I have met have said ‘Damn look at your arms, they’re hard as iron’ So it was simple arithmetic…adding the two together!

But wait- you were a bodyguard!? Did you protect anyone famous?
Yeah man, lots of celebrities!

Give us some names! Timberland, Akon, Justin Timberlake, Ginuwine…

Wow, some heavy hitters! Did you ever get into any dangerous situations? Nah, the most dangerous thing was when the girls got excited!

So you protected them from flying underwear as opposed to bullets? Yeah, and handbags, high heels, scratches.

Would you have been ready to take a bullet? Erm, well to be honest when it comes to this bodyguard thing its all show business. It’s about the look and glamour. Stars need the ride outside, the girls, the hotel, the after party and the bodyguard it’s all image! But don’t get me wrong, if things got heavy I would be there!

You’ve got the biggest biceps in the UK (24 inches) what motivated you? Hard work and dedication! My aim was not to have the Biggest Biceps in Britain….I just love the gym.

Were you really into sports when you were at school? Yeah I was a sports fanatic at school but I excelled at the high jump to county level would you believe it! High Jumpers are usually quite streamlined… Yeah, I was skinny in those days (before turning 15). But I was camera shy then so there’s no evidence!

Who were your inspirations growing up, did they motivate you to get ripped? Yeah Mr T, Hulk Hogan, He-Man, Gladiators….I wanted to look like these people I wanted to be a super hero and change the world!!

Your movie career started after Vinnie Jones spotted you in a club. Tell us about that first meeting. I was working in a night club in Mayfair back in 2004 and some trouble kicked off. I dealt with it. Vinnie Jones saw the drama came up to me and said “do fancy being in a movie” I said “hell-yeah”!

You’ve done quite a few movies, which was the best experience? The film Dead Man Running will always be my crown to stardom. Working with Danny Dyer, Ashley Walters and 50 Cent..but the Trexx n Flipside BBC show was a great learning curve living in a top hotel in Manchester for six weeks filming the series that was fun.

What was 50 like on the set of Dead Man Running? 50 is a cool guy and I respect him because he’s a business man. I met him on previous visits to London and I was in his music video ‘Hustler’s Ambition’ and I also did the G-Unit Reebok advert on the Internet.

You were wrestling before you starred in movies. Has the big screen usurped your wrestling pursuits? I’ve got my hands in all the pies, I still wrestle in Europe!

What’s your signature wrestling move? The special move is the GHETTO SLAM! When I start stamping my foot and waving my arms the crowd knows the slams coming, they start booing…

Booing?! Are you the villain? [Laughs] yeah but they love to hate me. I’m the bad guy, I make the crowd go crazy. But once the lights and cameras go off I’m a good guy.

What’s all this we hear about you becoming a cartoon! Are you hitting us with super powers? Tiny Iron half-man half-amazing, the ghetto superhero!! Originally it was just a trailer on channel aka. But I always wanted my own character so I got it developed. His special powers are his 24inch biceps and the 24ct gold chain rack. I’ll be taking
it to the next level soon..  You vs the Hulk…who would win that battle?! I would destroy hulk because I grew up watching him! I’ve mastered his style, he cannot fight me I’d be his worst nightmare! We are loving the guns, what do you do to keep them in shape? I train 364 days in the year the only day I don’t train I Christmas day because the gym’s shut… I do an hour a day, hit all major muscle groups and get out. Don’t believe what these experts say, you don’t need all that rest. Rest is for the tired and Tiny ain’t sleeping!

Taking any supplements? Nah man, but I love the chicken!! And Supermalt all day, I’m from Ghana and that’s what we drink to get hench!

With such a busy career/ workout schedule have you got time for a love life? I’m married to the gym! I’ve taken the oath. Any female I’m seeing is my mistress!

What kind of woman would be your ideal mistress? Rihanna, cos she’s unique!

What’s your mission statement for 2010? Be ready don’t get ready… Dead Man Running was on general cinema release in October 2009 and will be available on DVD soon.