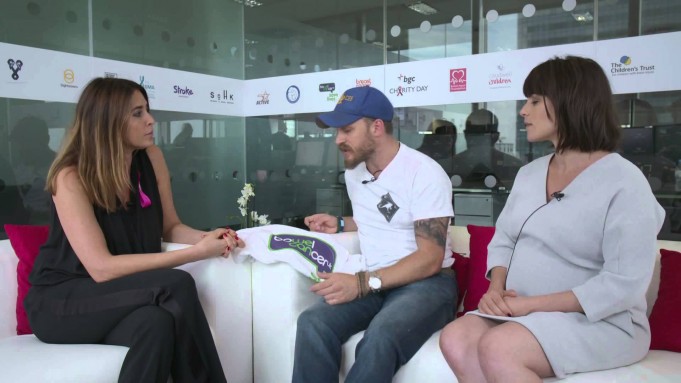 Together with his partner, Charlotte Riley, actor Tom Hardy, who is a Patron of Bowel Cancer UK, is urging men to ‘Be Brave, Don’t Shave’, by taking part in ‘Decembeard’ and raising funds for Bowel Cancer UK to save lives.

It’s a vital cause.  Every year, over 41,500 people are diagnosed with bowel cancer and more than 16,000 people die of the disease.  Bowel Cancer UK is determined to save lives and improve the quality of life for all those affected by bowel cancer.

Tom Hardy said, “Bowel cancer awareness is too low, so I’m backing Bowel Cancer UK because I want to help change that.  It’s a charity that needs our support to save lives and by taking part in Decembeard, you can make a real difference.”

His partner Charlotte Riley added, “Bowel Cancer UK is an important charity because they are funding vital research and helping people to recognise and talk about symptoms.  Please take part in Decembeard and help Bowel Cancer UK save more lives.”

Also taking part in the Bowel Cancer UK 2015 Decembeard campaign will be four men who know how devastating bowel cancer can be.

Michael Pattemore, Lynda Bellingham’s husband (now a Patron of Bowel Cancer UK) is one of them.  “Since Lynda’s death, it has been desperately important to me to raise awareness of bowel cancer.   Although spending another Christmas without Lynda will be very tough, I know it will be a special time to remember her and reminisce as a family about the memories we share.”

Andy Sutton is the father of Stephen Sutton MBE, who became known initially through his blog, Stephen’s Story, and went on to raise millions for charity before dying at the age of 19 in May 2014.  His father Andy Sutton, who lives in Cannock, Staffs, and has himself had bowel cancer twice, 20 years apart, will be taking part in Decembeard.

Andy will be joined by Mac Walker, from East Preston, Sussex, whose musician son Jonny died last year at the age of 21 from bowel cancer.

Mac said, “More than 250 people came to Jonny’s funeral and we all miss him dearly. Everyone needs to know the signs and symptoms of bowel cancer. That’s why I’m supporting Bowel Cancer UK’s Never Too Young campaign, to help GPs refer younger people more quickly for testing.   By taking part in Decembeard, I’d also like to help other young people like Jonny.”

He said, “I was admitted for an emergency operation in October last year after suffering from a number of symptoms including regular stomach pains and irritable bowel syndrome (IBS) for years.”

“It was a shock to be diagnosed with bowel cancer but I received amazing support from my family. There was a wealth of information and backup from a number of charities, including Bowel Cancer UK.  Decembeard was my first fundraising initiative, and I was delighted to raise some money to help Bowel Cancer UK to continue to raise awareness.”

The campaign is being supported by Bowel Cancer UK Patron Ben Richards, the Hollyoaks actor, who survived bowel cancer.  Ben said, “Lads, winter’s cold so why don’t you do your face a favour and give it some warmth this December whilst raising money and awareness for a great cause.  Grow a beard for Decembeard and help Bowel Cancer UK at the same time.” Taking part is easy, register at www.decembearduk.org, clean shave on 30th November and collect sponsorship throughout Decembeard, as your facial fuzz grows.

About bowel cancer, did you know?

About beards, did you know?