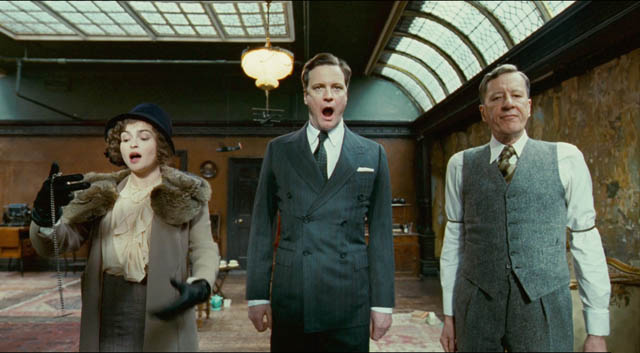 Last week saw us deliver numbers 10-6 in our list of Top 10 Best Movies of the past 20 years with the likes of This is England, Hunger, 28 Days Later, The English Patient and Slumdog Millionaire, now it’s time for us to break down our top 5, does one of your favourite British films make the list?

Based on a true story of one of Britain’s Kings and his struggle with coming to terms with becoming the King Of England and fighting his speech impediment in order to make him a respected member of the Monarchy. This may seem like an unlikely contender, but with performances from Colin Firth as Bertie, Helena Bonham Carter as his ever supporting wife and Geoffrey Rush as Lionel Logue, Bertie’s trusted speech therapist and closest friend all being that of pure brilliance makes this film an intriguing story of loyalty and a blossoming bromance worthy of a watch whether you have a love for the British monarchy or not. Starring some of Britain’s finest actors in Colin Firth, Tom Hardy, Gary Oldman and Mark Strong, Tinker Tailor Soldier Spy is a fairly new film to be added to the list. A tale set in 70’s England with spies and secret agents battling the wits of the Russians to keep British secrets from falling into the wrong hands. Filmed in such a way it has an old fashioned classic film feel about it, with a gritty grimy atmosphere aided by dark shadows this is without a doubt a major future classic. Four Lions is a film very much relevant for our modern times with the constant threat of terrorist attacks throughout the globe, but with a comedic twist. Director, Chris Morris has pulled off a major balancing act with not only portraying sympathy for these radicalised British Muslims but also making a valid point while not making it too heavy with numerous amounts of belly laughs. Cast perfectly with the likes of Riz Ahmed, Arsher Ali, Nigel Lindsay amongst others gives us a light hearted lift when the whole world seems to be in terrorist turmoil. Not all sc-fi films have to be about aliens, transforming robots or Artificial Intelligence and Moon just goes to prove that. This film goes back to basics and with only one character in the brilliant yet underrated Sam Rockwell’s Sam, this one man show (well with the aid of Kevin Spacey’s digital persona) is more a clever, intellectual story of how one man’s character is tested and how he reacts when faced with the question of his own existence. Yes there is a big twist which comes fairly early on in this film, but the crisp, cleanness of the whole story is thoroughly intriguing throughout.

Well Danny Boyle has popped up a number of times in this article and being the great Director he is he has won the number one spot with the film Trainspotting. This film really did awaken the world to just how creative, fun and disturbing British film making can be. Many thought this dark yet witty story glorified the use of drugs, I would say that came from the mouths of those who haven’t seen it or just were too dumb to actually get it. Not only was this an epic story but we witnessed some of the finest performances from the likes of the psychotic Robert Carlyle, Johnny Lee Miller’s wideboy to Ewan McGregor’s most memorable and disturbing performance of his entire career. Tie this in with an iconic soundtrack; this was definitely a major breakthrough for British Film making.

We know this list may cause some debate amongst many film fanatics out there, we had a lot to contend with when creating this list, British film really has produced some great classic movies over the years we just couldn’t include them all.