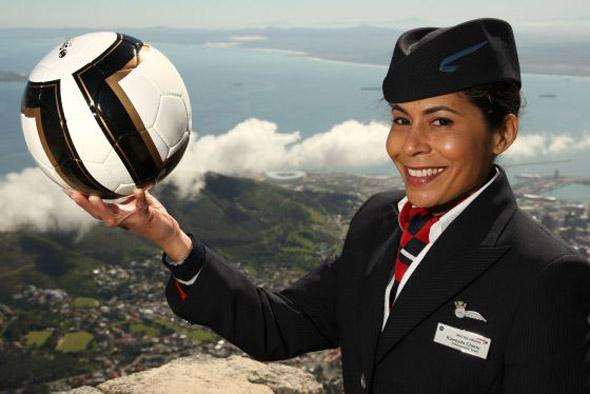 To show where’s best to go in the new year, travel experts from British Airways have selected their top 10 destinations for 2010.

Landmark sporting events such as the FIFA World Cup, Commonwealth Games and Winter Olympic and Paralympic Games influence the travel calendar. A growing trend towards eco-tourism puts Stockholm on the map, while Istanbul is expected to be one of the most visited European destinations in recognition of its recent title of ‘European City Of Culture’.

Richard Tams, British Airways head of UK & Ireland sales, said: “Customers recognise that there’s a world of opportunity out there – from tiger safari in India, to the FIFA World Cup in South Africa and the bright lights of Las Vegas.

“In 2010, holidaymakers will have more choice of beach destinations than ever, especially with our new services to Punta Cana, Sharm El Sheik and the Maldives.”

Nearly half a million supporters are expected to visit South Africa during the FIFA World Cup in June. With Cape Town home to stunning beaches, mountains, vineyards and the Cape Town Stadium, it’s sure to be a popular base for fans.

Sue Botes, British Airways’ commercial manager in South Africa, says: “Cape Town has always been a popular destination, we expect the World Cup to push it to the top of the longhaul league table as the best place to be in 2010. We are already preparing for the event and have additional flights in place, as well as our local carrier Comair to connect fans to destinations around the republic.”

2. Istanbul, Turkey
As European Capital of Culture for 2010, Istanbul is Europe’s hotspot in the New Year. Offering great value for money and something for everyone – from beaches and bazaars to the breathtaking Bosphorus. Secret music gigs, rooftop bars and underground clubs dominate the social scene for the party-hard locals.

3. Las Vegas, USA
The film ‘The Hangover’ has rekindled our love affair with the entertainment capital of the world. Not just a haven for partying – Las Vegas is firmly established as a family friendly destination with everyone from U2 to Cirque de Soleil performing on the famous strip.

4. Vancouver, Canada
Already a must-go destination for skiing and snowboarding, it’s no surprise that Canada will play host to the 2010 Vancouver Winter Olympic and Paralympic Games in February and March.

British Airways athlete Zoe Gillings is the UK’s number one snowboarder and hopes to compete in the 2010 Vancouver Winter Olympic Games. Zoe said: “Vancouver is one of best all-year round destinations for snowboarding and Cypress Mountain in West Vancouver is one of my favourite spots to train.” 5. Punta Cana, Dominican Republic
Punta Cana is one of the emerging destinations for holidaymakers in the New Year, with top tour operators citing local beaches as ‘the most stunning in the Caribbean’. Known for its golf and spa facilities, the island is one of the best-kept property secrets in recent times. Boasting a five-mile oceanfront, local hangout Cap Cana is rumored to be the new playground for the rich and famous.

6. Dubrovnik, Croatia
Known as the ‘Pearl of the Adriatic’, Croatia offers privacy and tranquility making it a popular hideout for the jet set, including recent visitors Jay-Z and Beyonce.

Mirjana Dostal, British Airways commercial manager Croatia, said: “Dubrovnik holds many attractions and delightful boutiques, with each corner of the city offering a unique experience. However its cluster of private islands have made this a new favourite destination for Hollywood A-Listers to get-away.”

7. New York, USA
New York has always been hip, but the New Year will give us yet more excuses to plan a trip. Due for theatrical release in 2010 are two film sequels celebrating Manhattan – ‘Sex and the City 2’ and Oliver Stone’s ‘Wall Street 2’…. apt timing for BA’s new 32-seat business-class only service from London City Airport to New York.

8. Stockholm, Sweden
Recently voted the best city in the world to live in, Stockholm has become the model city for others to follow. Europe’s epicenter of biodiversity and ecology will celebrate its official title of ‘European Green Capital’ in 2010, making it a popular choice for eco-tourists.

9. The Maldives
Set in the Indian Ocean, this tropical paradise will be one of the hottest destinations for holidaymakers and honeymooners in 2010. Collections of coral reefs boast unrivalled facilities for diving, while the picture postcard beaches offer chill-out bliss to the maximum.

10. Delhi, India
Thanks to the growing trend for ‘tiger safari’, nearby destinations Bandhavgarh Wildlife Sanctuary and Kanha National Park provide another reason to get off the beaten track and visit Delhi in 2010.