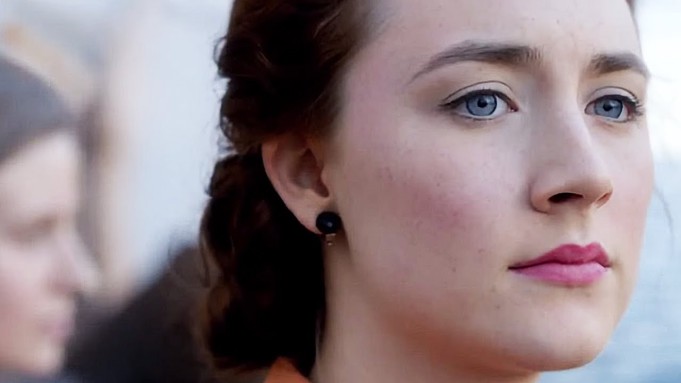 Brooklyn has been singled out as one of those rare features that strikes the elusive balance between being a perfectly pitched, beautifully shot mainstream romantic drama and a film that has Awards panels champing at the bit from the outset.

The film’s Outstanding British Film BAFTA win and three Academy Award® nominations are testament to this. Amongst a sea of stand-out performances is the central role of Eilis, played by Saoirse Ronan.

With Brooklyn available on Blu-ray, DVD and Digital HD from Monday, February 29th, what better time to re-live some of the remarkably talented 21 year old’s career highlights to date? This adaptation of Colm Toibin’s award-winning novel, with an Academy Award®-nominated screenplay by Nick Hornby, needs little introduction but for many it was their first glimpse of the talent that is the BAFTA and Academy Award-nominated Saoirse Ronan. As the homesick Eilis, who ships out to America in the hope of a life filled with better prospects than her home in Ireland can offer her, Ronan delivers an affecting, career-best performance defined by its subtlety and restraint. This didn’t go unnoticed with voters at the Screen Actors Guild, London Critics’ Circle, British Independent Film Awards, Palm Spring International Film Festival and the Hollywood Film Awards – all of whom awarded gongs for her performance. Ronan stars as Daisy in this coming-of-age drama centring on what happens to a young American girl who finds love (with George MacKay – Pride, Sunshine On Leith) while holidaying with relatives in England. It is the combination of an unexpected global war breaking out and Ronan’s unique screen presence that elevates this to something a lot more interesting than the average drama, despite budgetary constraints limiting the apocalyptic parts to some slight charring of the English countryside. Ronan’s chemistry with MacKay, however, is a lot more incendiary.

Perhaps the first film to cement Ronan’s range and adaptability, Hanna sees the young star playing the eponymous ‘perfect assassin’, who has been trained for the role since birth by her father (Eric Bana – Munich, Hulk). Sent on a mission that has her tracking a target across Europe, Ronan still manages to imbue the tortured, soulless killer with a range of delicate emotions that belie the film’s action cinema tropes. That she holds her own opposite not only Bana but also the ever impressive Cate Blanchett (Carol, Cinderella) is testament to both the young star’s skill and range.

Peter Jackson’s adaptation of Alice Sebold’s international best-seller in which a young girl copes with her own death at the hands of a local paedophile, whilst also dealing with her parents’ grief as she observes them from heaven might not sound exactly like a laugh riot – because it’s not. However, Sebold’s novel elicited almost universal praise on its release and Peter Jackson, riding high on the success of his Lord of the Rings trilogy, crafted a beautifully realised fantasy drama, at whose heart beats the force that is Ronan – tasked with displaying every possible emotion, often all at once. An arresting film that arguably, and certainly critically, didn’t achieve the heady heights of its ubiquitous source novel but that once again caused audiences everywhere to sit up and notice its faultless star. The film that really brought Ronan to prominence, Atonement may have been the door opener for her career but it was also a cruel mistress given the character of Briony Tallis is amongst the most reprehensible kids in cinema history. Solely responsible for the downfall of James McAvoy’s (Filth, The X-Men franchise) Robbie – and all as the result of a childish pique from which she never has the courage to climb down – Ronan is called upon to channel an endless level of demure spite; something she manages with an aplomb that easily explains the career that opened up as a result.