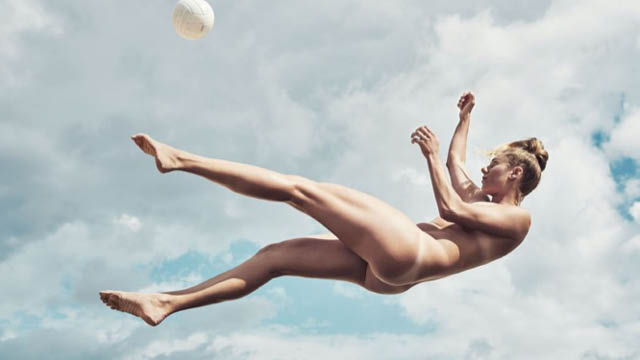 Beach volleyball player April Ross gets some air in her stripped down feature.

I mainly wanted to celebrate all that my body has done for me in my career, flaws and all,” the medal-winning athlete reveals. “And I wanted it to be a statement of freedom.

I’m so proud of how hard I’ve worked for this body. It’s the most genuine display of my dedication. I hope my feature encourages women everywhere to embrace muscles and strength and to love their bodies.

Surfer Courtney Conlogue hits the water for ESPN’s the Body Issue. Talking about her sport, the professional athlete says,

As a surfer, you work on a lot of things in order to be that top athlete in the water. And one of the things that you do is breath holds. And one of the most traditional ways to work on your breath holds, being a surfer, is rock-running. Just that raw energy and power and explosiveness of the sand and all of the different components of the shot were incredible.

I think that The Body Issue is tasteful, beautiful and a once in a lifetime experience for an athlete to be part of. I’m humbled to be included on the list of athletes who have been in it.

I’m training seven to eight hours a day. I’m always doing extra. I always stay after [training]. I always hit the bag after, do pushups and crunches after, or I might even go for another run. For some others, it’ll be probably be five or six hours or maybe even four, but for me it’s seven or eight.

Paratriathlete Allysa Seely poses in the Grand Canyon naked for the special issue. About the experience, she reveals,

Shooting in the canyon gave me chills. It spoke to me on many levels. I felt a sense of peace as it reminded me of my grandma, one of the biggest inspirations in my life. We often talked about how life is full of highs and lows and how important it is to appreciate both.

Women’s basketball player Elena Delle Donne talks about what made her decide to pose naked for the magazine.

It took some convincing. My agent likes to make lists of pros and cons for me. But in the end, I really believe in athlete bodies being a powerful image in our culture and showing that there’s not just one type of female body. There are so many different variations, and we’re all powerful in our own way. World champion female wrestler Adeline Gray will make her Olympic debut in Rio next month, and she poses naked in ESPN’s Body Issue.

The ability to redefine femininity through hard work and high goals in strong women is art and deserves to be shown to the world.