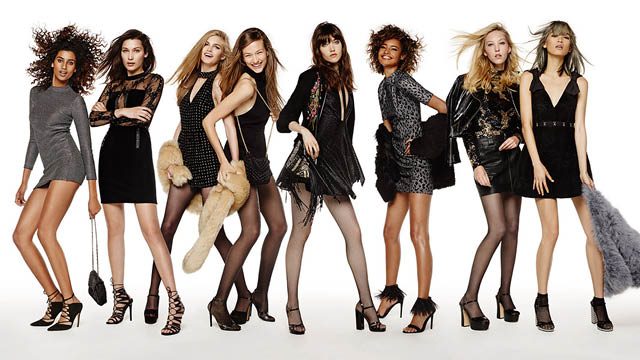 TOPSHOP would like to introduce you to the stars of their holiday campaign – eight girls leading the new supermodel generation. Modelling runs in the family for Bella Hadid. Daughter of ex-model and reality star Yolanda Foster and sister to our Topshop campaign girl Gigi Hadid, her career’s taking off with a Balmain campaign and walking the Topshop Unique catwalk. Read the Interview

By 19, Imaan’s CV includes Vogue cover star, Victoria’s Secret Angel, and face of Givenchy. The Moroccan-Egyptian model splits her time between Amsterdam and New York – as well as surfing
trips to Bali whenever she can. Read the Interview Kenyan-born and London-raised, Malaika made it big in 2013 – becoming the first black model to front a Prada campaign since Naomi Campbell in 1994. Since then she’s become one of our go-to girls to walk for Topshop Unique. Read the Interview

Marga is the ultimate Cali girl. Born in the Philippines, she moved to the West Coast as a baby, an upbringing she attributes to her blissed-out nature. Famous for her silver hair, you’ll spot her on catwalks from Gucci to Chanel. Read the Interview You might know Aneta as the girl who crept down the runway for a theatrical performance at Maison Margiela. But funny walks aside, this Polish beauty’s got a reputation as the sweetest girl on the model scene. Read the Interview

Growing up between Germany, Italy and England, Sophia is no stranger to the jet set. Discovered in a shopping mall at 13, she landed her first job as the face of Prada, followed by catwalks from LA to Tokyo. Read the Interview Star of our vintage-inspired Archive collection and seen on the Unique catwalk for AW15, Ella is a true Topshop girl. And with Keith Richards as a granddad and Kate Moss as a godmother – her cool credentials are hardly surprising. Read the Interview

Grace Hartzel is rock girl through and through. Scouted at home in St. Louis, her first show was the Raf Simons Dior Haute Couture show, before becoming muse to Hedi Slimane’s music-inspired collections at Saint Laurent. Read the Interview