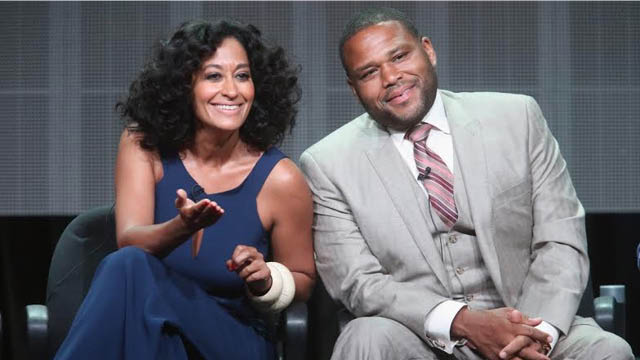 “I look forward to the BET Awards every year! Tracee and I are going to have so much fun this year celebrating 15 years in black entertainment television,” said Anthony Anderson. “I can’t wait to see all of my peers and the amazing performances that evening.  We may even have a few surprises up our sleeves!”

“Not only am I excited to be hosting the 15th annual BET Awards alongside my on-screen hubby, but I am so honored to also be a nominee!  The BET Awards always deliver an epic evening with the best of the best across movies, sports, TV and music,” said Tracee Ellis Ross.

Known for leading roles on NBC’s Emmy Award-winning drama Law & Order where he played Detective Kevin Bernard opposite Jeremy Sisto as Detective Cyrus Lupo, as well as the shows K-Ville and The Shield. Anderson also brought his talent and humor to the small screen in his own WB sitcom All About the Andersons, which was loosely based on his life. Anderson has appeared in over 20 films, and his performance on Law & Order earned him his second consecutive NAACP Image Award nomination for Outstanding Actor in a Drama Series for the 2008 season.

Actress, model, comedian, producer and television host, Tracee Ellis Ross began her career acting in independent films, variety series and hosted the pop-culture magazine The Dish on Lifetime. She is best known for her lead role as Joan Clayton on the UPN/CW comedy series, Girlfriends. She starred in the show from 2000 to 2008. In 2007, Ross also starred with her brother Evan Ross and Queen Latifah in the HBO movie Life Support. That same year, she appeared in the Tyler Perry theatrical movie, Daddy’s Little Girls and in 2011 had a leading role as Dr. Carla Reed on the BET sitcomReed Between the Lines. She won a third NAACP Image Award for Outstanding Actress in a Comedy Series in 2012 for her performance in the series. In 2014, Ross began starring as Dr. Rainbow Johnson in the ABC comedy series, Black-ish. In 2015 Ross was awarded an honorary doctorate of fine art (honoris causa) by Brown University. She is nominated in the Best Actress category for the “BET Awards 2015”.

BET Networks recognizes artists, entertainers, and athletes across 20 categories with the “BET Awards” 2015 nominations. The nominations are selected by BET’s Voting Academy, which is comprised of fans and an esteemed group of entertainment professionals in the fields of television, film, music, social media, digital marketing, sports journalism, public relations, and the creative arts.

BET Experience VIP Package offers the only way to purchase a “BET Awards: ticket, great seats to 3 nights of concerts at the Staples Center, and exclusive access to events at the free Fan Fest. For more information, including exclusive hotel rates, and to purchase tickets, go to BET.com/BETX.

A full list of the BET Award 2015 nominations is now available at http://www.bet.com/BETAwards

Watch clips from the BET Awards 2014