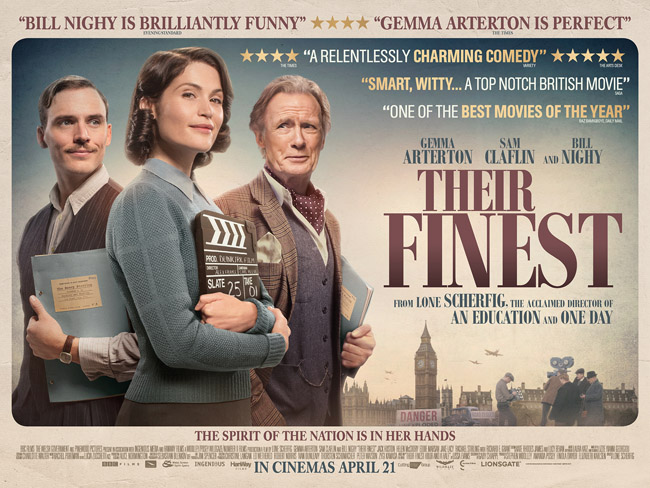 Their Finest, which had it’s European premiere as last year’s Mayor of London’s Gala at the BFI London Film Festival is based on Lissa Evans’ novel, ‘Their Finest Hour and a Half’.

In the trailer, Gemma Arterton plays Catrin, an untried screenwriter who just, low and behold, happens to be a woman in a sexist 40’s environment trying to make something of herself and be heard over the loud and obnoxious male voices.

Directed by Lone Scherfig, who previously worked with Claflin on the 2014 drama, The Riot Club, collaborates for the first time with Academy Award nominee and multiple award-winning producer Stephen Woolley (Carol, Made in Dagenham, The Crying Game) and she is reunited with producer Amanda Posey (Academy Award nominee for An Education and Brooklyn).

1940, London, the Blitz; with the country’s morale at stake, Catrin (Gemma Arterton), an untried screenwriter, and a makeshift cast and crew, work under fire to make a film to lift the nation’s flagging spirits; and inspire America to join the war. Partnered with fellow writer, Buckley (Sam Claflin), the pair, along with fading matinee idol Ambrose Hilliard (Bill Nighy), reluctantly joins forces on a movie to warm the hearts of the nation and capture the imagination of the US public.