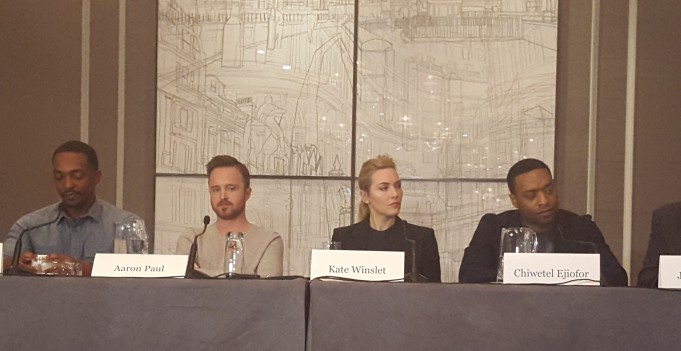 Next week see’s the release of John Hillcoat’s Triple 9 in cinemas in the UK. With a number of the cast in London – including Kate Winslet, Chiwetel Ejiofor, Aaron Paul and Anthony Mackie – Flavourmag went down to the Triple 9 Press Conference to hear what they had to say. When asked how difficult it was to start on this type of film when it doesn’t have a franchise to fall back on John Hillcoat said “Oh it’s very tough, it took a long time to get there. I’m always searching and looking for some kind of challenge especially in this kind of genre. I love genre films and I like to try and find something that is fresh about them and that is the big challenge. There are plenty of crime thrillers out there but this one was fantastic. I hadn’t heard of a Triple 9 before and it created a very rich moral dilemma”

Chiwetel Ejiofor is known for not taking a role unless it intrigues him, told us exactly why he got involved with Triple 9 “First of all just having John involved, but the concept and idea of it was always very intriguing and I have always been a huge fan of John’s films. He’s such a brilliant visual filmmaker. It’s a great character and the pulling together of such a great cast. Kate Winslet was asked if she was taken aback being offered this role “I was, I’ve long been an admirer of John’s work as a Director but as a storyteller his films are very violent and often quite bloody, but he does and quite unashamedly so is throw in all the violence and everything he wants visually and takes out the music and noises and sound effects. There is just some kind of honesty in that and something I have admired a lot since I saw The Proposition. I felt very excited to be involved and to do something different. Also this film was made quite a while ago, I had just had a baby who is now two, and he was only 6 months old at the time. To be honest from a selfish acting stand point I just wanted a short sharp jolt back into reality. I wanted to be terrified, I wanted to feel out of my comfort zone and to work with a great group of people to give me that feeling back and it certainly did all of the above”

Triple 9 is out in UK Cinemas 19th February.