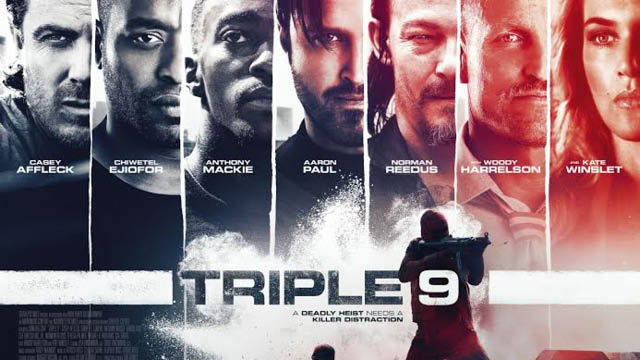 A deadly heist needs a killer distraction in the action packed and star studded film TRIPLE 9.

The action thriller stars Aaron Paul, Norman Reedus and Chiwetel Ejiofor and we’re giving you this amazing chance to win tickets to the exclusive event, which takes place in London on the 9th of February. Also starring in the gripping thriller is Casey Affleck, Anthony Mackie, Gal Gadot, Woody Harrelson and Kate Winslet

When a crew of dirty cops is blackmailed by the Russian mob to execute a virtually impossible heist, they realize the only way to pull it off is to manufacture a 999, police code for “officer down”. The chaos that ensues when a police officer is shot in the line of duty is just the diversion they’ll need to do the job, but whether they have the will to kill one of their own is an entirely different matter. Their plan is turned upside down triggering a breakneck, action packed finale tangled with double-crosses, greed and revenge.

We’re offering 2 lucky winners a pair of tickets each to the Gala Screening of Triple 9 on Tuesday the 9th of February at 9:09pm in central London. To enter, simply watch the trailer and answer the question below:

What colour is the smoke that erupts from the black sack and covers everyone’s clothes?

Email your answer along with your name and address to comps@flavourmag.co.uk and be sure to write ‘Triple 9’ in the subject header. Good Luck!

TRIPLE 9 IS IN CINEMAS ON FEBRUARY 19

Terms and conditions
1. Closing date 8th February
2. No alternative prize is available
3. Winners will be picked at random