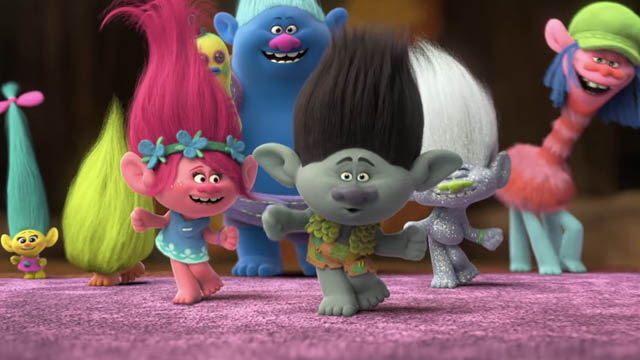 Coming from the filmmakers behind Shrek, Mike Mitchell and Walt Dohrn, have created a vividly colourful animation world of magical wonder for our children of today in Trolls – with a simple message that in all the doom and gloom our world presents we all need to find our happy place.

Trolls is yet another movie made from the concept of a Toy – one in which has been around for at least 40 years – with their trademark garishly coloured spiky hair which doesn’t flop no matter the weather, these miniature dolls have been a children’s favourite. Who better but Dreamworks to come along and give these creatures their moment on the big screen and pull in a whole host of well-known names to give them their voice?

In our Troll world, every Troll has a dance in their step and a song in their speech, everything is bright and colourful and each is as annoyingly happy and as excitable as a puppy when it welcomes home its owner. When Princess Poppy (voiced by sickly sweet  yet with balls of steel Anna Kendrick) decides to throw a party as loud as the thunderous heavens to celebrate 20 years of freedom – against the advice of overly cautious Branch, a grey and pessimistic troll voiced by Justin Timberlake – the Troll village is exposed to their number one enemy – Bergens. These ogre-like creatures live a contrasting world where everything is gray, lifeless and full of sadness. Each longing to be happy and believing the only way to achieve happiness is by consuming the Trolls.

Awakening the whereabouts of our performing friends, the Bergen Chef kidnaps a handful and it’s down to the all singing and dancing Poppy – who drags along Branch to rescue her fellow Trolls. With each passing moment, the audience is left waiting with bated breath for Timberlake’s Branch to burst out into song. The creators have made an intelligent decision to build the anticipation where his performance is concerned. Considering this man is an actual artist he only has 2 or 3 songs throughout the whole movie as his character has issues of his own which prevents him from singing.

There is no faulting in the pure skill and technical ability of the animators behind Trolls, the colours simply pop off the screen whilst being a perfect match for the feelings they represent. The soundtrack – which is a mixture of original and classic songs ranging from the 60’s through to the 80’s – being rearranged and sung by our cast members have been selected with party perfect precision and is to be considered what makes this film as enjoyable as it is, but with Timberlake serving as the Executive Music Producer the soundtrack was always going to be of high quality. The only downside is the narrative – a simple story with no real imagination –well apart from the glitter farting Troll – and the lack of comedy that the adult can enjoy we have come to expect. Trolls may not be in the same league as the beloved Shrek but should get major kudos for the effort to bring a little happiness into a world full of hate.

Trolls is out in cinemas October 21st.