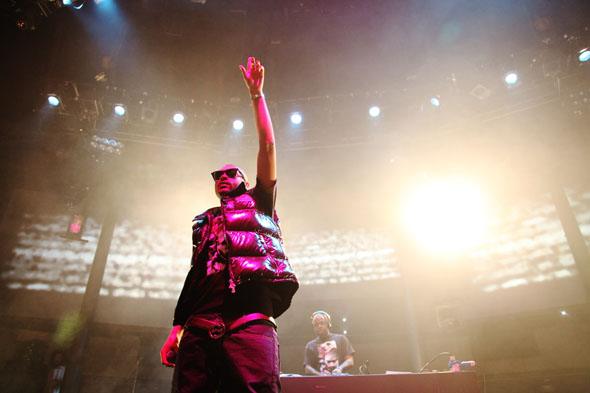 The air surrounding the inaugural Turning Point festival at Camden’s Roundhouse was filled with music and lyrics.

Even as you approached the venue you could tell that something big was taking place. There were young people everywhere, from the foyer to the stairs and in every available space. It was like being at a friend’s house when their parents had gone away for the weekend and there was nothing but fun in store.

Although music played a large part of the event, there were also creative workshops happening throughout the weekend where budding DJ’s, photographers and stylists could try out their skills to see if they had what it takes.

The Turning Point festival came about as part of the Roundhouse’s social mission in action. Young creative’s under the age of 25 were given the keys to the Roundhouse to organise and run the entire event.

Performances from the likes of Tinchy Stryder caused a mini stampede as the young people rushed to see the Number One artist perform some of his hits. Ghetts and Bashy were also in attendance to show their support.

Natty performed some his tunes such as the much loved Bedroom Eyes and Colours. Delivering his music with a live band as he strummed away on his guitar with one foot tapping in rhythm to the music. He did resemble a certain Mr Marley whilst he was on stage.

There was a lot to see and hear, from poetry, to DJ-ing to live performances. The festival definitely showed the different forms of expression music and lyrics can take. Even though the event was aimed at young people there were a lot of over 25’s there, illustrating that the event was so well organised and executed that it was a crowd puller.

As the sun began to set and the air became chilled the headline acts appeared on the main stage. The Noisettes gave an electrifying performance and got everyone grooving away to their eclectic sound. The final act of the day was Kano who showed the crowd exactly what Grime is all about.

All in all a fantastic day of entertainment and good vibes that showed once again, that when young people are given the support and resources they can put on a show that rivals the long standing festivals that take place each year. So judging from the success of the first ever Turning Point let’s hope there will be another festival to look forward to next year.