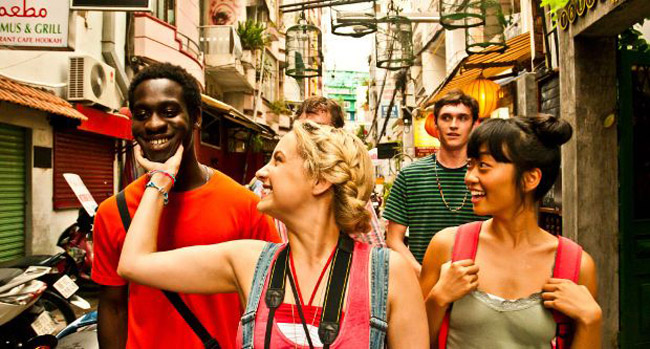 Much like it’s audiences, E4 shows are brimming with teenagers and young adults;

those on-screen tending to be of the idiotic, misfit type that get into a lot of antics. So when a new show comes along boasting a group of ragtag, thrown-together adolescents, we’ve got to know that there’s something new here. Smash hit The Inbetweeners broke the mould back in 2008, leading to a total of three series’, two films, and an unsuccessful American remake. This being the level to surpass or at least match is a tall order, but not an unreasonable one. Gap Year brings a selection of new personalities into surprisingly unexplored territory and attempts to find its own voice, relatively successfully.

University student Dylan (Anders Hayward) and his best friend Sean (Ade Oyefeso) arrive in China on their gap year, somewhat misguided on each other’s intentions for the experience itself. While Sean perhaps would’ve been more at home on a European party island, Dylan’s heart is set on ‘accidentally’ running into his ex-girlfriend. Along the way they run into a trio of travellers: Asian-American May (Alice Lee), who is struggling to come to terms with the natives dislike for her Westernised personality, perky fun-loving Ashley (Brittney Wilson), who is pretty reckless with May’s money and is just out for a good time, and the unwanted tag-along, Greg (Tim Key), a British man reliving his travelling days after his recent divorce.

It takes a while to work out if the show will go off the beaten track or simply follow the beats of those before it, but the new backdrop and characters types are welcomed. It’s surprising that the idea of a comedy show about teens backpacking has taken so long to come in to fruition, considering the absolute playground of shenanigans to be explored. It should be noted that while The Inbetweeners certainly did go on holiday and tried to backpack in Australia, Gap Year takes its characters the full-hog, encapsulating the spirit of travelling many of us have experienced or at least imagined.

The mix of characters in the story are thankfully not complete rehashes of years before, and while the contrast of English and American can sometimes feel like it’s trying to make a point without there ever seeming like there is one, the girls definitely bring something to the table here and aren’t just American for the sake of it.

It’s hard to really root for anyone in the first episode as they all seem to show their unlikeable traits. But could it be that what we’re really dealing with here is a group of flawed people whose issues are waiting to be explored alongside the comedy? Episode two certainly seemed to provide more hope in this sense and what a great challenge to watch these young faces tackle. Sean’s speech about his frustration with Dylan and why he came on the gap year in the first place is a positive example of some heart and character conflict. To distinguish itself from the noise, Gap Year would certainly need to provide something of substance through its writing if it’s to compete in the big leagues.

The comedy itself is not as outrageous as you may expect and the episodes don’t travel at a laugh a minute. Thankfully, it doesn’t need this to keep the story moving, but it’s unclear whether this was the show’s intention or if the jokes just aren’t hitting the mark.

From what we’ve seen of the first two episodes of Gap Year, the show does provide something fresh, however, it doesn’t seem to really push the boundaries far enough to make much of a lasting impact. That being said, it has a lot of elements on its side to make something of itself over the coming episodes. In terms of its story, it has a lot of places to travel and that in itself gives Gap Year enough potential to be given a chance.