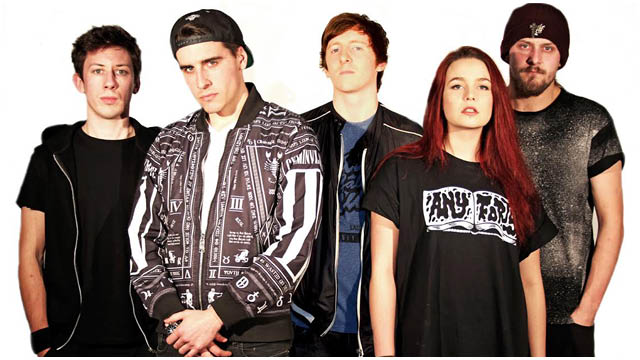 What do you get if you bring a bit of drum n bass, rock, metal, punk together…confusion or at least that should be the case but UK:ID have somehow managed to make these seemingly very different genres work together in a musical harmony.

The quintet met at Stafford University (uni such a great place for bands to form) and since they formerly created their band in the Student Union Bar their name for heavy bangers has grown.

After admittedly doing some ‘s7**ty gigs’ in the beginning they finally dropped their debut album Freedom of Speech in June which evidently is the product of a couple of years honing that all important band cohesion and understanding.

Flavour had a nice chat with the band about among other things, categorisation-so bloody irritating I am sure!

UK:ID Well I guess because we speak a lot about social and political issues, and more often than not our songs have a meaning behind them, you’d expect that our name has some deep and mysterious meaning too… but actually it doesn’t. It was just a random throwing together of letters one night when we were having a few drinks in the Students’ Union bar, a few years ago at uni. I think in the end we took the letters from our student ID cards – they had UK:ID stamped on them, or something like that. We thought it would look good on a poster.

Break down the musical journey of the band, what’s it been like ,tough?

Yeah it’s been tough. Still is. I think it’s tough for any band who starts out rehearsing in a garage and playing in shitty pubs, wanting to learn their trade and play real music rather than just auditioning for X-Factor and thinking that’s what it’s all about. We were pretty lucky though because the rehearsal rooms at uni weren’t at all shabby. We were studying music tech and video production so we had the use of some half decent equipment and facilities, which definitely helped. That’s where the band started out, at uni, as a four piece – Ella didn’t join us until later.

Despite shabby places you have to do that I expect in the beginning?

Well our first aim was to just to gig as much as possible, even if it meant playing to one person but I would say it paid off because we developed quicker as a band. After a couple of years we were able to put together our first two EPs and also our first video. But the main aim was still just to gig as much as we could, which we did, and I guess through our determination and hard work we finally started to make a noise and get noticed by various promoters and other industry heads.

What was your big break?

Our first big break came when we were booked to headline the second stage at the Godney Gathering Festival last summer. That was wicked, we played to our biggest crowd yet and everyone loved it and we really haven’t looked back since then. We managed to raise the funds to record our first album by doing a crowdfunding campaign, and it was at this point, when we started recording last autumn, that we brought in our fifth and final member, Ella. That made a real difference, especially in terms of where we could go musically, and I think we were able to produce a better album for that reason.

You are hard to categorise, explain your sound?

Well that’s been one of our main issues, you know, everyone wants to categorise us. I guess that’s the problem when you try and do something original, no one’s really sure what box to put you in. To be honest we just see our sound as a drum & bass/rock fusion with a bit of hip-hop, soul and attitude thrown in! But at the end of the day it’s just the sound we create as a band. We’re not aiming to be “categorised”.

Are you a band or a group of MCs,?

There you go trying to categorise us again! A band, I guess. A rock/drum n bass collective made up of a drum n bass MC producer, a metal bass player, a classic mad-man drummer, a futuristic prog metal guitarist and an awesome rock chick soul singer/vocalist. Who would have thought that mixture would work?

Press states some big names from drum and bass genre, Prodigy must have been a huge inspiration for you.

Yeah Prodigy, Pendulum, Does It Offend You and others. As a band we look up to artists doing a similar thing to us. The fusion between dance, punk, indie, rock and rap in its broadest terms always interested us as we thought we could really develop our own, original sound from those same – or similar – ingredients. We see this kind of fusion as a way to create original and fresh sounding music, especially as technology and the electronic side of things grows coz it enables “fusion” bands to develop and create fresh, energetic sounding material. We believe it’s the way to create new genres and create exciting music.

You are dropping a debut album, why is it the right time.

Well we’d been together for around 3 years and we finally thought we had enough solid material to create a quality sounding album which we would be proud of. The general aim of the album was to help raise the band’s profile through radio play – we released a single off the album which was also called Freedom Of Speech and we got some good airplay and some great reviews. Safe to say the album’s won us a whole new following, sold more than expected and made enough noise to get some good interest in the industry. So we’re really pleased with that.

What can we expect from that album?

You can expect to get to know us and our music and what we’re all about, artistically and in other ways, too. Essentially the album is an introduction, a starting point for people to hear UK:ID musically and lyrically. You’ll have to give it a listen and let us know what you think.

Lastly what’s on the agenda for you?

More hard work! Seriously though our agenda changes by the week, but generally things are looking good, exciting and challenging. We have some big festivals lined up for the summer and another tour being booked for later in the year, as well as a few other things we can’t really talk about yet – all hush hush till the big deal is done, you know how it is! Anyway, suffice to say for now we’re all really positive and very excited for the future.

FREEDOM OF SPEECH OUT NOW