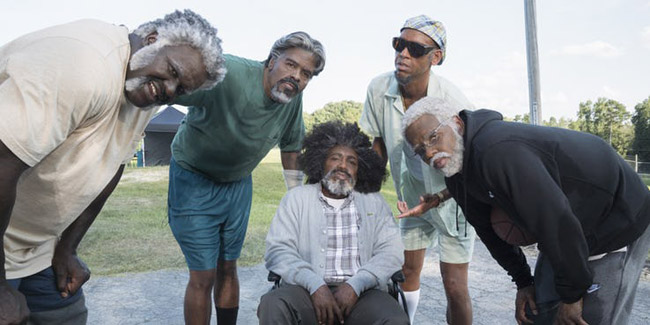 There is a crucial issue with releasing films that mostly appeal to American audiences into the UK market; an issue that stands grounded very much within the core of Charles Stone III Uncle Drew is its cultural content. Don’t get it twisted; I’m referring to the particular subject of the film, Basketball and not the ethnicity of the cast. Based on a character from a Pepsi commercial, Uncle Drew remains a significant player in the fun stakes; but the cultural divide in humour is, at times, like dropping into a deep dark ravine.

The plot centres on Dax (Lil Rel Howery), having grown up in care his one dream was to become a Basketball player. Having failed at that due to his own self-confidence issues he ends up becoming a coach with a hanger on girlfriend (Tiffany Haddish). His luck seems to be turning a corner after he ensembles a killer team to enter the annual Rucker Park tournament which, as a result, happen to have a prize fund of $100,000.

However, his fortunes take a turn after his arch-enemy Mookie (Nick Kroll) steals his star player and Dax discovers himself without a team. With his hopes appear to crumble into dust, Dax witnesses Uncle Drew, in his prime, tearing up the court giving the younger generation a run for their money. Convincing Drew to be in his team comes at a price; Drew wants his old team back together to compete. As the film ventures into more of a road trip, the old and young come together convincing the team of Preacher (Chris Webber), a blind Lights (Reggie Miller), Wheelchair confined Boots (Nate Robinson), and the grumpy “Wolverine’s Grandfather”, Big Fella (Shaquille O’Neal) back into their shorts and onto the court.

The plot content is more filler than killer. There are more subplots than a player’s got ‘side chicks’ but this doesn’t bog down the weight of the film. One issue between Uncle Drew and Big Fella is the longest played out issue between the ageing men. A problem caused back in their player days when Drew slept with his girl. But as soon as the issue is properly addressed the conflict is over in the blink of an eye; Coupled with the fact that Lights is legally blind when he reunites with his teammates. But as soon as he is given a pair of the appropriate glasses he miraculously possesses 20/20 vision all over again. This all leads to a lack of any real believability. That’s not all; the script gives nothing in the form of originality. It’s predictable and fairly loose with its dialogue, with jokes dropping like a bomb without making a dent of any real impact.

But it’s not all doom and gloom for the picture. It does have its fun moments from outings of the classic 70’s tracks to throwing in a Biggie tune every now and again. There is, in addition, a killer sequence in which the senior boys give the young bluds a run for their money on the dance floor. It’s commendable that Stone makes that tongue in cheek effort to never completely allow the picture too seriously.

Uncle Drew fails to hit that slam dunk but considering where the original idea stemmed from it has its fun merits. Never trying to be anything other than it says on the tin, it’s an hour and a half of fun clichéd entertainment but it’ll never win any trophies of excellence.