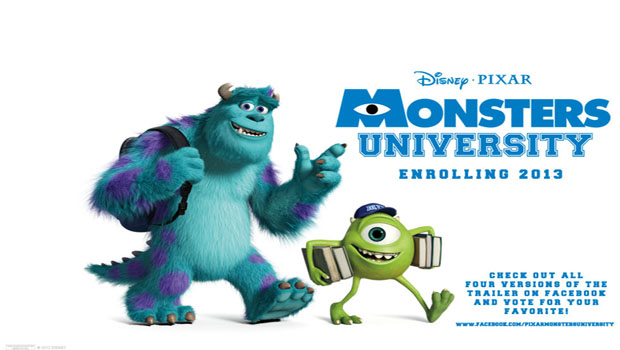 With a host of great movie sequels due for release this year, here’s the lowdown on Pixar’s next instalment of Monsters Inc – Monsters University. Now, you’d be mistaken if you thought this was purely a kids movie as adults would also definitely enjoy it too. Monsters University is actually a sequel-prequel to Monsters Inc, as the story is set ten years before the first film. However, whilst a need to have watched the first film is unlikely to be prerequisite to watching the second, a little prior knowledge will undoubtedly be a help. It’s really easy to watch films online nowadays by signing up to rental or online streaming providers so you have no excuse!

So for all those who haven’t seen Monsters Inc or can’t remember it, the film takes place in the parallel city of Monstropolis, a place inhabited by monsters and powered by the screams of children coming from the human world. It is the job of the employees of the Monsters Inc. factory, including best friends Sulley and Mike, known as ‘Scarers’, to venture into children’s bedrooms and collect their screams after scaring them.

And so on to the sequel-prequel. Set 10 years prior to Monsters Inc, Mike is 17 years old and eager to start college as is fellow fraternity member Sulley. The two haven’t previously met and are the exact opposites. Mike is small, intelligent and serious whilst Sulley is big, all-brawn and playful. However, they have one thing in common – they are both majoring in scaring, a clash that soon leads to a rivalry that will see them go to jail amongst a series of episodes that threaten to tear their worlds apart.

The trailer leads with, ‘there’s a little monster in all of us,’ and, in true Pixar style, it will, undoubtedly, be the personification of their creations that kids and adults alike relate to, which is why they’re great family entertainment.