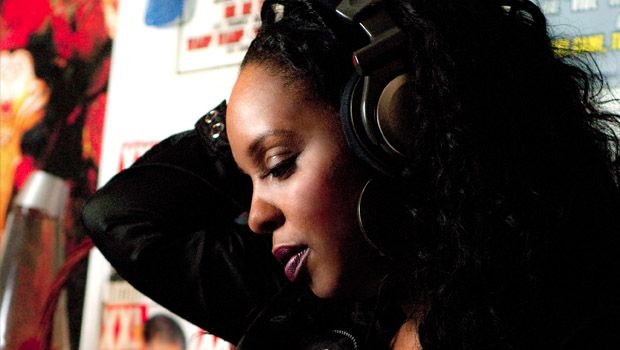 Here’s something you may never had thought you’d hear: Rah Digga aka Dirty Harriet spitting over House Music beats. Before you turn your nose up at such an idea you need settle yourself, pick your jaw up from the floor and listen to her new track ‘I Heard You Say’. In the first instance it’s an infectious, quirky instrumental beat that Rah soon stamps her authoritative tones without compromise and brings her rawness to this up beat track. “Where’d all the females go? You’re a raw ass spitter, man we miss your flow, cmon now Digga we’re tired of these same old ho’s. You owe it to the girls tryna get their shine Using bodies instead of their minds”.

There is no mistaking the flow or lyrical style. I’m curious as to Rah’s interest in House Music and she reveals…
Well House music has always been very prevalent in Jersey. I know Chicago gets treated as birthing House Music but I think it was birthing in New Jersey at the same time. It’s definitely something that you hear throughout the city . At every party, every cookout, every wedding, every funeral there’s always House Music going on. If you are old you’ve been listening to it for a long time. If you are young you’re forced to listen to it because of your parents or older family members. It almost has a pied piper effect here in Jersey. So I always been a fan of House music party & bullshit so I’ve always secretly dibbled and dabbled in house but now I’m going full steam ahead actually rapping on house tracks. But I’m doing it just because I’m older now and I’m spending more tme in the community and it’s all they listen too here. There’s more house music being played in New Jersey above all other genres of music and that includes rap. It’s definitely something that’s in the air here

Rah Digga is a down to earth artist, not afraid of speaking her mind and always able to back up any stance or career decision she embarks on. Indeed Rah is so comfortable laying her raw bars over party shaking house that she’ll be releasing an EP ‘Hood House: So Jersey’ that’s bound to get dance floors in Jersey and beyond shaking. It’s remarkable that Rah sounds like Rah on any tracks in spite of what might be unfamiliar music styles…
Right! Exactly! That’s the beauty of it no matter what I’m rapping on – I’ve even got a couple of dubstep tracks – I still sound like Rah Digga.

Rah also reveals that she has plans to get more involved with her community and her Hood House release will be a useful tool for this ambition…
I’m gonna shoot 2 videos for the hip house stuff. It actually ties in with a community-based project. I’m raising money to bring a dance facility to the heart of the city downtown Newark. I’m gonna get kids from the neighbourhood to be involved and do the videos with me. All the proceeds will go towards this dance centre we are trying to build. I’m also running for Council Woman in my city. I’ve been dabbling in politics and hopefully I can do that if I don’t have to go on tour or anything. Rah Digga as determined as ever puts heart into whichever project she turns her hand to…
I want people to know I’m having fun with the Hip House plus once the videos come out I’ll be launching a ‘Kickstarter’ too for the dance centre project and it kind of ties in with the house tracks I’m making. It will all start making sense to people and shows this isn’t here jumping on a trend or making this music to get back in the game or something. She is actually doing something with this music with the community; you know it serves a purpose.

But hey Rah Digga is first and foremost an emcee and she hasn’t by any means ditched traditional Hip Hop what else has she got in the pipeline? She laughs and says…
There are a couple of folks who are like “Ah we don’t wanna hear Rah rapping on no house music!” For the ones that don’t get it and just don’t understand there’s a Hip Hop mix tape just for you! That’s what people really love me for so I can’t ever abandon that aspect of it. As much as I’m an artist and I love to do different things and I don’t want to be put in a box. I just know what sound I’m received best for my spitting so I figured. I know I don’t have anything to prove to anyone lyrically at this point, by the same token I understand there’s a whole new generation of those who are not familiar with Dirty Harriet so I just need to keep reminding folks this is how I get down, this is how the females from my era get down take it or leave it!

Rah’s realness leads me to ask her opinion on a couple areas of Hip Hop that have been contentious to say the least. What’s her take on the Kendrick Lamaar verse that has had his fellow emcees up in arms?
RAH Kendrick Lamarr’s verse? I loved it! I think he stirred the pot. I think he got folks more conscious of the records they’re putting out. It may not change anything necessarily with what they are doing with their routine but it sparked some pretty fiery responses. It kinda bought back a little fun into the game. So ok now folk’s are rhyming the best they ever rhymed where as prior to that they’d be getting ready to drop their next strip club anthem or something! I think he was really calling his soldiers to bare arms like look! This is Hip Hop lets rap. He’s letting people know, hey we’re all cool and fun but at the end of the day this is Hip Hop, I’m here to have the best rhymes imaginable that your fans don’t even like you anymore. I think that’s how every emcee thinks but just the fact that he said it got people going.

And how about the gap that exists between emcees of Rah’s generation and the up and coming young ones who may still be teenagers?
At the end of the day this is a culture we built and no one is putting an age limit on me. I’m gonna rap for as long as I wanna rap and if I end up being the Betty White of the mic so be it. If the Rolling Stones can tour for fifty years so can a rapper. There’s a disconnect between the younger and older generation. I think it goes both ways. The younger generation cuz they have it so easy now they don’t really understand the groundwork that had to happen to make it as easy. When I was promoting an album I couldn’t sit at home and tweet the world on a computer. You had to get up and go to these cities. It’s easier to acquire a mass fortune with all the technological advances and stuff that’s going on now in music, it wasn’t like that 10, 20 years ago. What it costs now to blast something all over the web, for $200 someone will do a blast service and put your record in the hands of a million DJs. Once upon a time you’d spend a million dollars going to each to get em to put their hands on the joint.

It’s a different time now. I think the younger generation don’t understand and respect the struggle that had to happen in order for them to move in the way they do move now. But by the same token I feel that a lot of the older generation are attacking the newer artists but they are not really delivering themselves musically. To come out and talk about how sucky the music is in your opinion but you’re putting out sucky music too? At the end of the day this is still Hip Hop you still need to know how to rhyme. If you are a legend just be a legend. Don’t come out bashing folks and then you put out music and it sounds horrible! You kinda give the rest of the veterans a bad rap when you do that or make us look bitter but everybody doesn’t feel that way. Rah is on a musical heltah skeltah spitting on a variety of sounds but ones that her style flows over effortlessly…
Incidentally I have a lot of rock inspired rap beats, I would call it the underground version of yeezus (she giggles) and again it wasn’t done on purpose. I managed to amass beats from various people, the bulk are from these 2 guys and a lot of them contain electric guitar and again that’s just another sound that works really well with my voice. It’s become a nice musical rollercoaster with me – oh she’s got Dub, she’s got rock stuff, traditional stuff she’s all over the place.

Has she got any collabs she’d like to make happen?
Dream collabs for the album? Roc Marciano, core Hip Hop dude. I’d love to collab with Azealia Banks maybe on one of those hip house remixes. She’s my favourite female artist right now, Danny Brown I think is awesome too.

Any tour plans?
I’ve got some dates lined up in October in South America and the Caribbean. I would love to come out to London and next spring I may be collaborating on a UK mix tape also.

Rah is a busy woman and it’s time for the interview to draw to a close but she leaves us with words that guarantee Rah Digga the real Emcee is back and holding no hostages!
I don’t change my lyrical tenacity, I might have fun with different sounds of music but I’m always gonna rhyme this way whether I’m rapping on ‘Heal The World’ for Michael Jackson or on an open mic showcase. I always sound like Rah Digga! Only Rah Digga could get on a house track and rap about Rakim Allah! No one else is gonna do that!