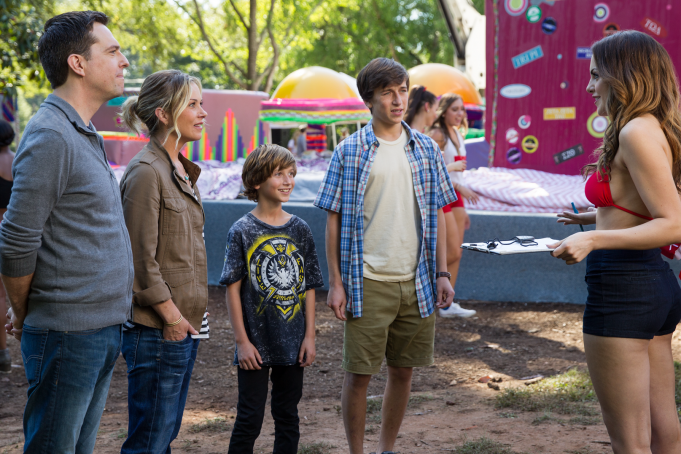 The Griswold family capers go back many years, in fact in film form, goes all the way back to 1983 with National Lampoon’s Vacation starring Chevy Chase and Beverly D’Angelo as Clark and Ellen Griswold and their children Rusty and Audrey.

National Lampoon was originally a comedy series from John Hughes short story “Vacation 58” which was first published in the National Lampoon Magazine. Since the first film back in 83’ we have seen seven of these films punted out, but can the type of humour that kept us all entertained back in the 80’s stand the test of time and really still be a hit in 2015?

Vacation centre’s around the next generation of Griswold’s when we see Rusty Griswold (Ed Helms), now an adult himself, wanting to follow in his Father’s footsteps and bond with his family after overhearing wife Debbie (Christina Applegate) moaning about their normal vacation to the same cabin every year. Rusty decides to round up his wife and two sons for a road trip to Wally World, A family theme park, just like his own father did when he was a child. Of course in true Griswold style what lies ahead is nothing but outrageous situations that come hand in hand with any Griswold vacation. Our first stop see’s the family stop at Debbie’s old college where Rusty finds out a few of his wife’s secrets, especially that her nickname was Debbie does anything. Debbie’s name is quite legendary and when some of new generation in the college front her out for being old she tries to show them she still has it by downing a pitcher of beer and trying to make it across the obstacle course which was originally her idea, only to fall flat on her face and vomit endlessly. Applegate has her character pretty spot on and delivers the stomach-turning scene pretty flawlessly. However, seeing the same old gags and mishaps just prove to be a mild bore.

You can pretty much guess the outcome of the rest of the film from this very scene alone, from the family taking a detour to a hot springs, not wanting to wait in line they are directed down a short cut and starting bathing in what turns out to be a sewage pond while all their belongings are stolen from the car. Covered in faeces, they make it to Rusty’s sister’s who just so happens to be in a shame of a marriage to the extremely handsome Stone (Chris Hemsworth). Hemsworth makes a short cameo playing a vain yet perfect man and when he struts around the house one night in nothing but his boxer’s to the delight of the ladies on and off screen when we see exactly how big his package really is.

The mishaps just go on and on and on, it has to be said that the script stays extremely close to the original 1983 film, whilst updated for the 21st century it’s stayed true to its original roots, even gracing us with the appearance of Clark and Ellen Griswold towards the end of the film. Yes in part Vacation can be funny, but it’s the kind of humour that just seems a bit too dated. We simply have seen this kind of comedy repeated time and time again. It’s certainly a Hollywood tried and tested formula that takes absolutely no brain power to watch, even if it will kill a couple of brain cells along the way.

Vacation is crude, at times vulgar and vaguely humorous film that should be left to sleep a peaceful sleep and give the rest of us a vacation from a tired old storyline.

VACATION is out in UK Cinemas 21st August.