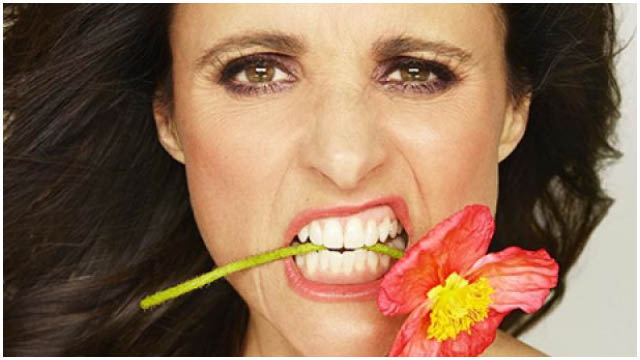 HBO has revealed the release date for its super addictive TV series VEEP season 4 which stars actress Julia Louis-Dreyfus who plays Selina Myer a former senator and presidential candidate. Selina has risen through the Washington ranks all the way to the second highest post in American politics.

The problem is that now she’s made it, there’s very little for a V-P to do. Trapped in a pointless role with little power and surrounded by incompetent staff and petty bureaucracy, Selina must use the little authority that she has to make her mark and leave a lasting legacy while navigating her way through the day-to-day political assault course that is Washington DC. In the new third season, Selina and her staff are launching her campaign for president.

In Julia Louis-Dreyfus recent cover shoot for Entertainment Weekly, Julia poses in a floral themed shoot including one shot where a goat is eating her dress! In her interview, she opens up about the political comedy where she plays Selina Meyer. Go to http://www.sky.com/tv/show/veep to see more info on VEEP.