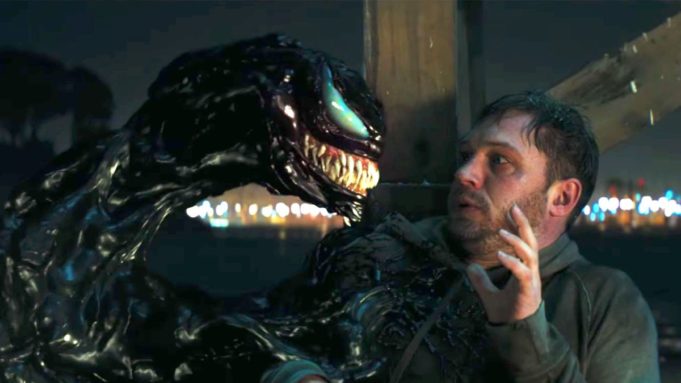 Like every year for the last decade, 2018 provided us with many superhero movies, including Avengers: Infinity War, Black Panther, Aquaman, Deadpool 2, and even Incredibles 2.

However, the movie that got most tongues wagging (and not always for good reasons) was the what-did-I-actually-just-watch Venom. Largely slated by critics but somehow absolutely loved by audiences (it is currently at a worldwide box office total of $855,013,954), Venom’s 29% critic score and 83% audience score on Rotten Tomatoes shows a great divide between quality movie-making and simply wanting some good old CGI fun at the cinema. It’s safe to say the reactions were very mixed, but here’s what a few had to say on Rotten Tomatoes:

“A tone-deaf, uneven and maddeningly dumb clunker that never settles on an identity, all the way to the closing credits.” – Richard Roeper, Chicago Sun-Times

“Venom is riddled with the poison of dullness.” – Peter Bradshaw, The Guardian

“Part of the reason the superhero genre has managed to elevate itself is it gives us characters that we root for and care about. Venom does none of this.” – Peter Howell, Toronto Star

“There’s nothing memorable in Venom, nothing to talk about the next day. But if it happens to hit you right, its lightness is refreshing.” – Mick LaSalle, San Francisco Chronicle

“It’s a mess, but wow, is it ever a fun, fascinating mess.” – Katie Walsh, Tribune News Service

“Takes what it has, runs with it and bounces around within its parameters to mostly engaging effect.” – Sarah Ward, ArtsHub

With the sequel already in the works, it remains to be seen if both critics and audiences can be pleased once a new director sits in the chair for Venom 2. Director of the first flick, Ruben Fleischer, had to pull out of the project due to the filming of Zombieland 2, but no one as yet has even been attached to take over the reins. Tom Hardy, who plays Eddie Brock/Venom, is set to reprise his role in the sequel. There weren’t so many highlights in Venom, but Tom Hardy’s engaging performance was certainly one of the few, that’s for sure. Hardy’s watch even became a bit of a star, with the Bremont U-2/51-JET getting more close-ups than perhaps even co-star Michelle Williams – look out for it to appear a lot on this watch selling site.

When he’s not selling calendars and being all handsome and cool, the 41-year-old Tom Hardy is certainly a wanted man on many Hollywood movie sets. Rumoured to be among the next candidates for a future James Bond role, he’ll next appear as Al Capone in Fonzo, which depicts the last year of the notorious criminal’s life. Hardy will wear a considerable amount of prosthetics to achieve the right look for Al Capone, but as he has acted brilliantly in masks in numerous films before (Dunkirk, Mad Max: Fury Road, The Dark Knight Rises), this likely won’t be an issue for the talented actor.