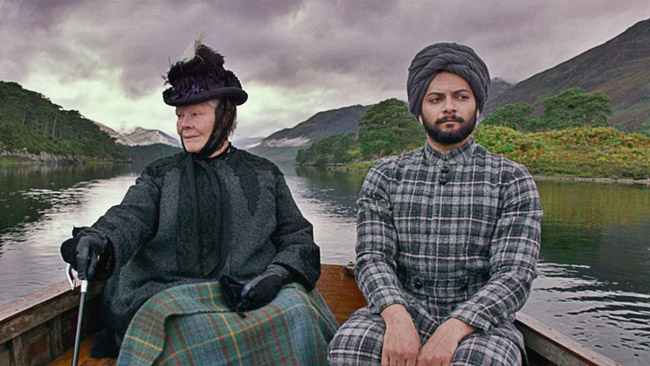 It’s not very often we see an actor reprise a role they so dutiful thrived in twenty years previous, except Dame Judy Dench, who excelled as the cantankerous Queen Victoria in Mrs Brown only to regally accept Stephen Frears offer to return to clad the black mourning dress for the comedic and delightful final twilight years of the formidable monarch, A monarch, who didn’t bat a single eyelid when it comes to ruffling racist establishment feathers.

Frears Victoria and Abdul centres on the later life of the Monarch, tired, bored and lonely, Dench’s Victoria glides through her obligations like no one is watching, shovelling down her multiple course meal at a banquet dinner, only to nod off at the end completely ignoring her guests. It’s only when a young Indian fellow, Abdul Karim, played by up and coming Bollywood actor Ali Fazal, is sent from India to present a coin to her Majesty does the old gal show some signs of new life. Breaking all the rules, the attractively charming Abdul catches the eye of the Queen instantly sparking her interest and an unlikely friendship starts to blossom, to the detriment of all those around her including Bertie the future King of England, played with hateful rigour by Eddie Izzard.

It certainly is a film of two tones, one in which soars as a gentle British comedy depicted through their blossoming friendship, in which Abdul quickly rises in stature and becomes the Queen’s Minshi aka teacher. Taking his time to teach her how to speak and write Urdu, he is a source of escapism for the Queen, teaching her the ways of the culture of the land, even though Empress is not allowed to visit because of the Fatwa on her head. The other side of this story is the blatant racism of the privileged white men and women of her court who are adamant this relationship is a major threat to the country and they will do whatever they can to darken his name and sway the queen into their way of thinking, but this is one Queen firmly set in her ways. Frears doesn’t shy away or gloss over the ignorance shown in this period of time, which has an underlying presence in present times.

Dench is as iconic as her wonderfully comfortable depiction of Victoria, once again encompassing the humanity of a woman who is best known for her selfish frostiness and obstinacy. Frears, having previously worked with Dench on Mrs Henderson Presents and Philomena, knows his leading well, her constant camera close-ups are effortlessly telling, speaking a thousand words within its silence. Fazal as Abdul has charisma pouring from his very pores, almost childlike yet genuine in his adoration for Victoria whilst letting the bile racism wash right off him like oil on water.

Caked in jovial racism is a slight niggle but then we have to remember the period it is set in and the narrow-mindedness that beset British values, Despite this, Victoria and Abdul is a truly engaging platform for Dench to air her power monologues with such stern vigour in a joyously tender story.

Victoria and Abdul is out in cinemas September 15