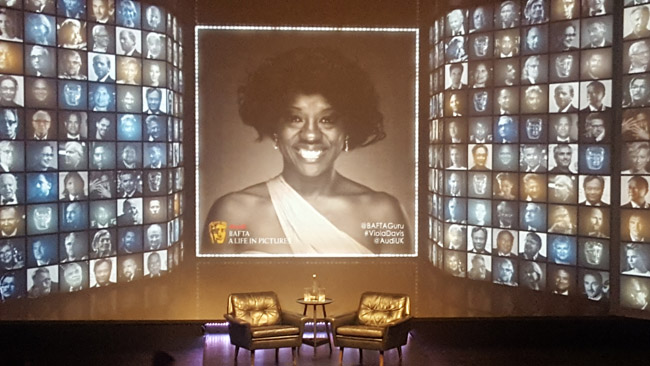 On Sunday, January the 15th BAFTA, in partnership with Audi presented A Life in Pictures with 2017’s Golden Globe Best Supporting Actress and BAFTA nominee for her role in the upcoming film Fences,  Viola Davis.

Hosted at BAFTA headquarters in Piccadilly, London with a champagne reception and a jam packed full house consisting of BAFTA members, press and the general public, Viola Davis, who looked absolutely stunning at the tender age of 51, took to the stage to talk through her life on stage and screen with journalist and broadcaster, Danny Leigh who hosted the event.

Davis, who has been in the business for thirty years and graduated from Julliard in 1993, was catapulted into the cinematic mainstream from her one scene, scene-stealing role in 2008’s Doubt where she played a mother of an alleged victim of abuse by a Priest opposite Meryl Streep which had critics raving about her performance. In 2011 she played a black maid called Aibileen Clarke who went against the white folk they worked for as basically slaves alongside Octavia Spencer and Emma Stone. It was this performance that saw her nominated for a BAFTA as well as an Oscar and Golden Globe and received a Screen Actors Guild Award. She has since gone on to star in films such as Prisoners, Enders Game and 2016’s Suicide Squad and currently by seen in How to Get Away with Murder.

If there is one thing we picked up from this event it’s the fact that Davis is still a truly humble human being as well as having no time for pussy footing around certain subjects. Honesty was very much at the forefront of her answers to the questions from Leigh. We’ve picked out some of the highlights from the talk below to give you a taste of how exceptional a woman and actress truly is. Davis on deciding to be a stage or screen actress.

“It’s not a matter of wanting, it’s just that’s what you do as an actor. You know, I’m at a point where I listen to people all the time saying, “You want to be a stage actor, TV actor, screen actor?”, and I’m thinking, “What does that mean?” I wanted to be an actor. Your agent calls and says I have an audition for you, like OK, and you know what, I’m gonna just be honest, sometimes you do it for the money, because 95 percent of us are unemployed at any given time, all these people you see up here represent 0.007 percent of the profession, they really do. Most actors out there, they’re struggling to eat, they have mortgages on their homes if they have one, a lot of them have put off having children, they have a horrible Peter Pan syndrome. You know, I see actors all the time who have $200,000 of student loans because they went to acting school like NYU or Yale, and they have $200,000 of student loans but “I don’t want to do television”. And I’m thinking to myself, myself, the one who grew up ‘paw’ and I’m thinking who’s gonna pay for your student loans? Sometimes you do the job for the money.”

After watching a clip of her knockout performance from Doubt, Davis went on to talk about how depressed she was after first witnessing the scene…

“The first time I really saw the scene was in the looping session, ADR session, I was so depressed. I thought it was so horrific that I went home, I remember I went home, I went to a restaurant in Santa Monica and I had a salad to go, and four bags of bread.

And I went home, and I lay down for maybe a week, the bread was gone after five minutes. And I ate, I had the blanket over my head, until one day my husband finally got hit to the fact that I wasn’t getting off the couch, and he said, “What’s wrong with you?’ And I said, “Julius, this is going to be the end of my career, it was horrible, I went to looping it was horrible”, and he said ‘Well, what was Meryl doing in the scene?”. And I said, “I don’t know what the hell she was doing I wasn’t looking at her! I was looking at me!”

Interestingly, Davis also revealed that she had major issues surrounding The Help, a film that was a career game changer for her.

“I absolutely love the premise, absolutely love it, I love the fact that Skeeter said ‘I am going to write a story from the maids’ perspective of what it feels like to work with these white women’. Operative term meaning the maids’ perspective. I don’t feel like it was from our perspective, that’s the problem I had with it. I had it from the very beginning. Now there were a lot of things in the book that I did like, and then there were some things in the book that I had issues with, number one meaning, or being, that Skeeter would offer the women money to tell their stories, knowing that it’s dangerous for them, knowing that they’re meeting late at night, in their homes, and I think at one point she offered someone $38. And in the book the response with all the women were, “No Miss Skeeter we don’t want the money, we just want to tell our story.” They would take the money. They would take the money. I mean look at Aibileen was not even eating in the book. She’s eating preserves given to her by her neighbour. She is barely making a living wage, they would take the money! That’s number one. Number two, the anger, the vitriol, and the hatred that they would have towards these white women if they were asked, if they were put in a situation where they were isolated, would have been vocalised. You didn’t see none of that! You saw Minny putting the shit in the pie, but to be perfectly honest I think a huge part of that, which I am so thankful it was in the book, but a huge part of that is comedic in nature, so it’s an easier pill to swallow”.

“It wasn’t in there, there was a scene with Minny and Aibileen where they’re in, it’s the big scene where they’re dancing, all the people are dancing, and that’s when they’re doing the bunny hop and all of that, and Minny and Aibileen are in the back, and they’re preparing the food and they’re laughing about all the clothes that everyone is wearing and Minny says , “Well I’ve got to go out there and serve some food”, and I say “Yeah, you serving crackers to the crackers!”.  And you know, cut. And it was cut because they felt it was too mean. But, there was no problem with the white characters saying ‘nigger nigger nigger’. So it was not telling the story”.

These excerpts from the interview are just a little of what we were privileged to in getting to know, if just a little, how down to earth, humble and brutally honest this Hollywood star really is.

Viola Davis is undoubtedly one of the most underrated actresses of our time, with each character she takes on she gives nothing but 110% of her extraordinary talent. We’ve got our fingers crossed she wins the ever deserving BAFTA she has been nominated for.

A video of the whole event will be added to this post once available.