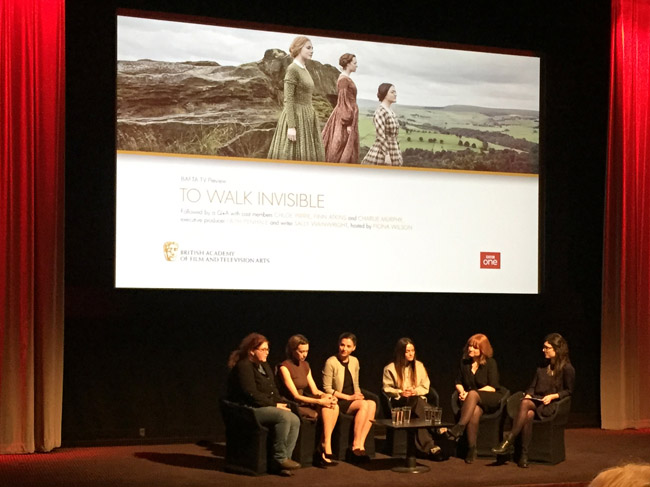 We had the pleasure of watching an advanced screening of To Walk Invisible, a one-off 120-minute BBC drama that will air on Thursday 29th December at 9pm on BBC1.

To Walk Invisible tells the story of the Bronte sisters, perhaps the world’s most famous literary family behind such novels as Jane Eyre and Wuthering Heights. The drama sheds a new light on the story of these three remarkable women. It is perhaps fitting that we attended a preview of this drama at the BAFTA headquarters, an institute that is steeped in its own rich history. It seemed a perfect place to showcase a story adapted for TV of three of the greatest novelist’s British history has ever produced. The screening was followed by rapturous applause by those in attendance, then a Q&A with writer and director Sally Wainwright as well as the cast. Biographical stories are never easy to adapt for film or TV. It can be even trickier when you are tasked with telling the story of the women behind some of the greatest novels ever created when they are all from the same family. The first thing this drama gets right is the casting, with each of the Bronte sisters feeling distinct and unique in their performances. Each of the actresses’ subtle physicality, as well as their demeanor, really enhances the characterisation of the roles that they play. The family itself is as dysfunctional as anything you will witness in EastEnders or Coronation Street, which creates an entertaining story that is part prestige period drama and part melodramatic pulpy household tragedy. In the Q&A Sally Wainright commented on the language used in the drama “We didn’t know how people spoke back then, so wanted to try and make it sound more vibrant and alive and didn’t want them to speak old-fashioned English”.

With that in mind, let’s meet the Brontes.

Audiences might be more familiar with Finn Atkins for her portrayal of a loutish youth in Eden Lake. In To Walk Invisible she further expands her acting range playing the elder of the Bronte sisters, Charlotte. Despite her slight frame and small stature (4ft 10in). Charlotte is determined, fierce and relentless and does not suffer fools gladly. It is her impetus and perseverance that has a big hand in the Bronte’s works getting published.

Perhaps a familiar face to avid TV watchers, Emily Bronte is played by Chloe Pirrie who already has an impressive string of TV appearances on her resume, including TV dramas The Game, War and Peace and Brief Encounters, to name a few. Emily Bronte the historical figure remains a mystery and a challenge to biographers because information about her is sparse. In To Walk Invisible she is very much the matriarch of the family, a strong yet compassionate woman, offering support to her sisters as well as their often deplorable brother Branwell.

The youngest and least famous of the Bronte sisters, she is played by Charlie Murphy who has starred in the likes of Love/Hate, The Last Kingdom and Sally Wainwright’s other drama, Happy Valley. As the younger sibling, Anne is often slow to speak her mind and often caught in the middle of the rest of the family’s quarrels. The black sheep of the Bronte family once regarded as a prodigy in his own right and one that had a big influence on the Bronte sisters in their early life. In To Walk Invisible he is the cause of much of the conflict in the Bronte household with his erratic nature and struggles with alcoholism.

Played by film veteran Jonathan Pryce, Patrick Bronte, the father of the household, is given a great sense of gravitas and screen presence despite not being the focal point of the drama. His experience and skill as an actor really brings the character of Patrick Bronte to life and, despite his limited screen time, perhaps gives To Walk Invisible its most heartfelt moment.

This is very much a passion project for Sally Wainright having confessed to reading “27 books as part of her research” With its picturesque 1800s Yorkshire setting and its pulsating family dynamic, To Walk Invisible is a stylistic, very well-realised prestige period drama. The Bronte family are really brought to life on screen and you will struggle to find a better homegrown drama on the BBC over the festive period, so be sure to circle it in your diary.