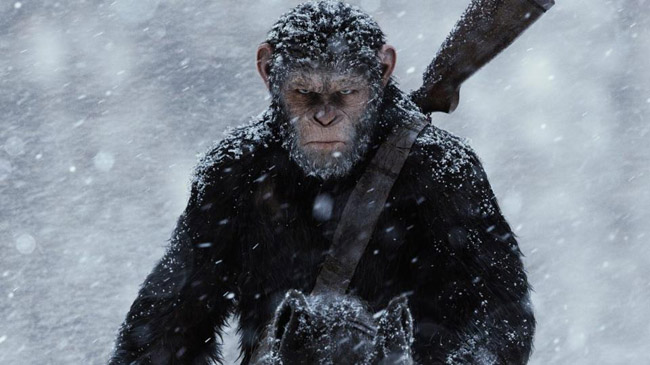 In the final showdown of Ape versus Human, Andy Serkis’s Caeser stands strong in an epic blockbuster of swinging action, humanised humour and a tender heart of morality that could teach human’s a thing or two – a fitting end to possible one the best trilogies to grace our screens.

In the third and final chapter, set two years after Dawn of the Planet of the Apes, the war in this title shouldn’t be taken quite so literally as Dawn director Matt Reeves returns with a subtle and subdued war with respectful nods to the great films that set the tone, graffiti blazoned across the walls of an underground tunnel stating ‘Ape-Apocalypse’ and ‘The Great Esc-Ape’ are the closest we get to an over the top and spectacular battle. Instead, Reeves concentrates on Caeser’s battles with his own demons, ravaged by the memory of the betrayal of Toby Kebbell’s Koba in the previous setting which ended in a mighty battle which saw ape against ape, and his own personal journey of revenge at the forefront of his final mission.

After a human hit squad army storm the apes settled home, Caeser, accompanied by Rocket (Terry Notary), Luca (Michael Adamthwaite) and the lovable orange fur ball Maurice (Karin Konoval) mount their steadfast steeds to travel across snowy, mountainous and treacherous lands in a bid to find and confront the leader of the rogue unit Colonel, played with an eccentric menace by Woody Harrelson. Doused in western road trip ambivalence, Caeser and his loyal apes who would lay down their life for Caeser pick up a couple of strays along the way.

The first is a mute young girl, the orphaned Nova (Amiah Miller) who holds a striking resemblance to a young Dakota Fanning, who could be the next in the evolutionary chain, is taken under the care of the big-hearted Maurice. Our second is the almost hairless ‘Bad-Ape’, a former zoo primate played by Ape newcomer Steve Zahn – Bad-Ape brings the light-hearted touch that provides the previously missing belly laughs, comic timing and his physical costume of a woolly hat and body-warmer are all thrown into the arena along with some accurate faeces flinging.

The surprising element is the enormously tender and emotional arc that hits you right between the eyes from Caeser’s own painful soul-searching to his fellow primate mates who have evolved not with human speech as most still sign, but from the expressive expressions and the intelligent lack of resentment from their incarceration, Compassion for their human enemies is key to War’s narrative.

On his third outing in the Mo-Cap suit of Caeser, Andy Serkis is the epitome of an Oscar-winning actor, embodying, to perfection, not only the carnality of a chimp but a tender morality, compassion and vehemence that makes up his character. I, for one, now call a petition to get Serkis the recognition from the awards boards he so truly deserves. As always Harrelson as the manic Colonel, gives crazy a new home, behind the eyes of a man that relishes eccentricity.

More of a contemplative battle than an all out visually explosive war – although its final battle gives you that if your desperate for mindless explosions – War is an intelligently compassionate and a heroically poignant end to an ape-tastic trilogy.

War for the Planet of the Apes is in cinemas July 11.