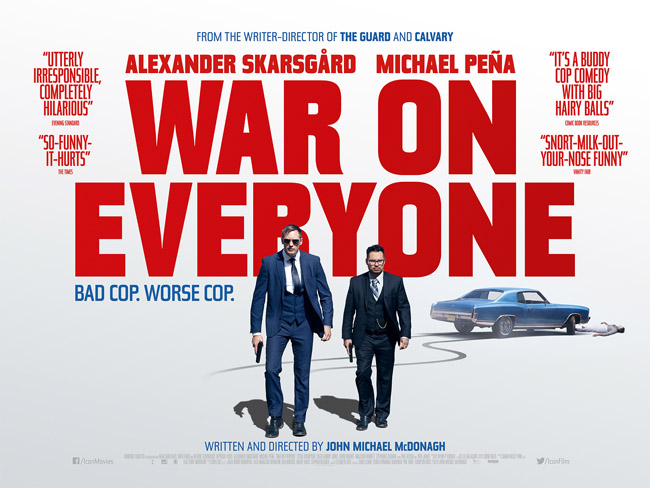 Crime fighting comedy buddy movies are coming out on top this year, where people will tend to draw comparisons between this year’s The Nice Guys with War on Everyone there is just one major difference – these boys are oh so bad.

Surprisingly, War on Everyone has English/Irish director, John Michael McDonagh at the helm. Why surprisingly? McDonagh was responsible for films such as The Guard which see’s Brendon Gleeson as an offensive Irish cop seeking out his corrupt employers and Calvary, again starring Gleeson as a priest putting his house in order before his time is up at the hands of a disgruntled parishioner – two completely different films to what we have here – for McDonagh, with the help of his little and large leading men, Alexander Skarsgård and Michael Peña gives us a mildly funny movie which packs an almighty offensive punch leaving a vast black hole of nothingness through the middle of where it’s heart should have been.

Hulking Bad Cop 1 – Terry (Alexander Skarsgård) has many layers topped off and hidden by his love for alcohol, Bad Cop 2 – Bob (Michael Peña) has an equally impressive love for snorting cocaine – both dirty as hell but with an underlying and quiet moral fibre you have to dig deep for.  With a deep affection for making a quick buck or two the pair wants in on a bank robbery headed up by a vicious British member of the aristocracy – played by Theo James – and aided by his equally vile and malicious henchmen that include a cowardly Caleb Landry Jones as Birdwell.

War on Everyone is hardly has a quiet and understated narrative as its brash temperament takes a step into the dark side. As James crosses that fine line which has the boys question how far they are willing to go for a bundle of cash – this turns into an inevitable chase across the city – and a trip to the frosty lands of Iceland – for Terry and Bob as their priorities change in this convoluted twist.

With each childish behavioural joke, comes a different scene in quick succession almost like a firing machine gun – short, sharp and rapid fire – making for a dizzying and at times mystifying premise lacking any focus. Skarsgård and Peña do a stellar job in bringing this odd but perfectly suited partner’s to life but a lack of a real soundtrack leaves a story which feels almost empty, lacking any warmth.

War on Everyone is out in cinemas October 7.