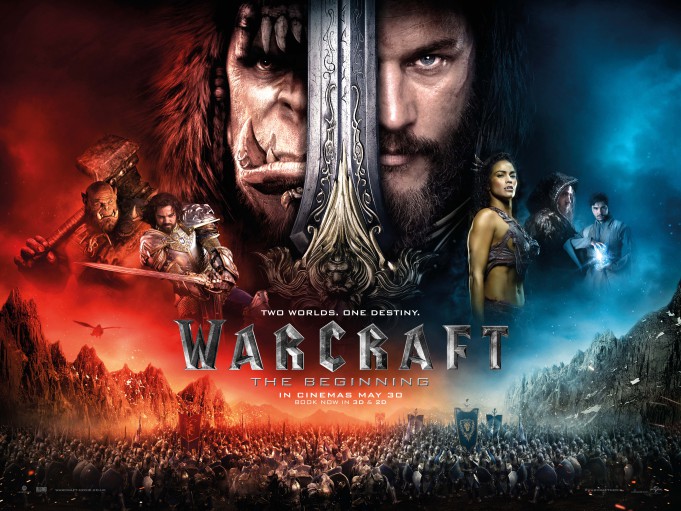 Taking the helm on Warcraft is British Director and writer Duncan Jones, a man better known for films such as the compelling Moon and the intriguing Source Code. Entering the world of gaming fantasy and explosive CGI effects is a big change in direction for Jones and his first outing in this arena. Contrary to what others may say this is an entertaining, magical and throwback escape into another world. Warcraft: The Beginning consists of two magical worlds; Draenor, a dying world, home to the Orcs whose lives have always consisted of war. Lead by the power mad warlock Gul’dan (Daniel Wu). The Orcs need a new home, Gul’dan seizes the opportunity with a magical portal which transports them to Azeroth but in order for Gul’dan’s powers to thrive and to open the portal for all Orcs to enter he has to feed of the life force of humans. This is where the battle begins.

When peace loving King Llane, a medieval looking Dominic Cooper, learns his beloved Stormwind is under attack he sends his best men Commander Lothar (Travis Fimmel), young magician Khadgar (Ben Schentzer) and Stomwinds Guardian, Medivh (Ben Foster) to explore exactly what and who are at the helm of the trouble. Whilst all this is going on an Orc Chieftain, Durotan (Toby Kebbell) comes to the conclusion that Gul’dan is to blame for his dying world and breaks bread with the humans along with half orc half human Garona (played by a stiff and unconvincing Paul Patton). As one world battles the other with brute and powerful magical forces for their own kind’s survival, it slowly dawns on both Lothar and Durotan that maybe war isn’t the answer to their problems. Can both species eventually live in harmony with each other? This is the question and it provides us with a clue that as with the likes of Lord of the Rings this is only the first episode in what looks likely to become an expensive franchise.

With the foundations being laid all happening in the first half of the film makes it quite sluggish, heavy going and the great use of CGI seems disorganized and messy, but as the story settles so does everything else. The battle scenes towards the end of the film are more cohesive than the former and the story starts to make a hell of a lot more sense. The terminology used along with the story can make this pretty heavy duty at times and those in the audience who have never crossed paths with its gaming origins may well and truly feel baffled.

Warcraft: The Beginning is in UK Cinemas May 30.